Bolivers, my dad Walt told us, was what they called the fried bread dough that my grandmother offered as a regular meal when there was nothing else to eat during the Great Depression in the 1930s. Growing up, it was my family’s tradition that we ate bolivers every Christmas morning before unwrapping our gifts. One usually poured molasses or maple syrup over the boliver.

As Christmas drew near, Walt would make a great pillow of bread dough and then park it in a covered pot on the steam radiator so as to rise overnight. He usually did this three nights in advance of Christmas. Ricky Cramshaw always came over to have a boliver after his folks unwrapped their presents. Through the years various other friends joined in with this tradition and chomped down on a sticky, chewy boliver. Watching Walt stretch a wad of bread dough as thin as he could, and then toss it into a sizzling pan of fat, was also part of the tradition. After one ate a boliver, there was a period of sitting and falling half asleep as the boliver settled like warm sand into your belly. Truth is, no one really much cared for bolivers themselves – it was all about tradition…the tradition that was set down by Gram Hulga Stead.

One year, the day after Christmas, Ricky Cramshaw and I were playing with these wonderful electric Lionel trains I had received. That year, Tessie was not proud of the fact that they had bought me ‘used’ trains, but actually I couldn’t have been happier. My grandfather (who passed when I was four) had worked in the Ramapo Iron Works shop on railroading equipment, so I equated the old-style toy trains with him. Ricky and I were configuring a track set-up when Walt called us up for bolivers.

In the kitchen he first powdered his hands with flour and then started stretching two wads of bread dough. He told us this was his mother’s way of keeping the family eating during the Depression. Ricky asked him, “Why was everybody so depressed back then?”

Walt tossed our bolivers into the snapping and crackling hot fat. Then he looked at us and said, “Well sir, back then, a lot of rich people fixed it so that most people ended up stone-broke. Pretty soon no one had jobs or if they did, they didn’t earn much money and they couldn’t feed their families. It was a bad time.”

Ricky said, “But your mother fed everybody, right?”

“Well, she fed us just like other mothers found a way to feed their families. Bolivers is poor people food.”

Ricky said, “So, I guess that means we are poor, huh?”

“Nope, it means that at this time of season we remember our poor background and maybe that makes us a little kinder to those in need.” 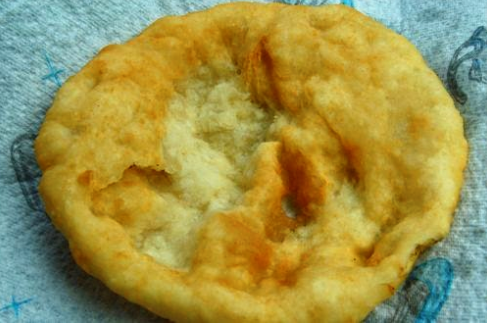 He had already flipped our bolivers and was now forking them out of the spitting fat. He plopped one down on a plate for each of us and set them on the table. We buttered and poured maple syrup over them. He made another one that cooked fast enough for him to join us. As we sat there eating the bolivers, Walt admitted something to us both, he said, “You know, I don’t think anyone really likes bolivers, but at this time of year we have our traditions.”

We agreed and once we finished eating, we slunk off to the electric trains but soon were both sound asleep on the floor, our bellies full of warm sand.