For the Love of Lovage

Our cooking instructor, Eva Szigeti, muses about lovage and what’s in a name…

As parents, we make many important decisions. Among the first is the naming
of a child.  Finding the right name for a new baby is often a long process full of careful considerations. Many factors play a role: our origin, cultural and religious background, education, and our hopes regarding the future of our offspring. Finding a name for a newly born baby means naming without knowing who that baby really is as a person. We can only imagine the personality or ‘grown-up looks’ of our newborn. We hope that the name will be a good fit for the child’s personality and a good fit within our family and society (regardless of whether our priority is  “to fit in” or distinguish our child from the crowd).

The Latin proverb “Nomen est omen” captures he predictive power of a name, and is certainly at least partly true. A name puts a person in a social and cultural context. Unfortunately, it can result in stereotyping people, and can lead to assumptions, not only about our origin or social status, but also about our behavior.

I was walking in my garden admiring the newly emerged plants when these thoughts about naming began to occupy my mind. It was because some lovage had caught my eye. A lovely plant with an even lovelier name. Lovage is an old European herb widely used in medieval kitchens and herb gardens, but largely forgotten today. So forgotten, that the word didn’t even make it into the spell-check dictionary on my computer. As I was writing this text, the spell-check constantly indicated that there is an error in the word lovage. 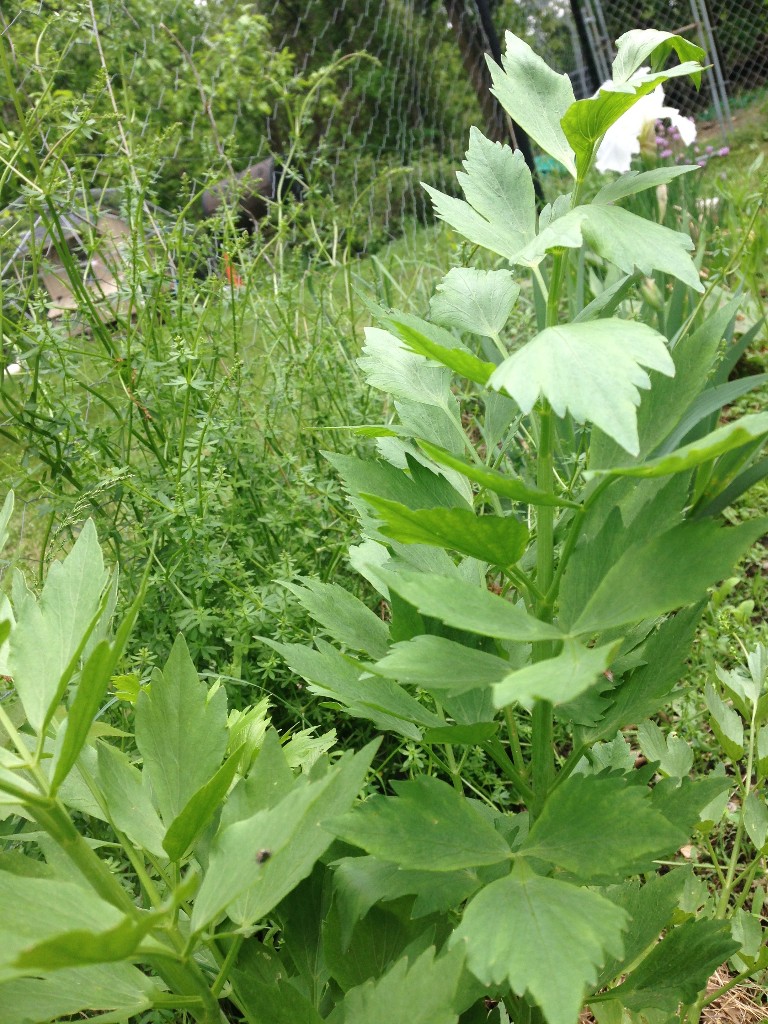 My mind kept wondering about the origin of this strange word and whether “Nomen est omen” applies to plants.  Lovage looks little like a celery (although unlike celery, it can grow up to 5 feet tall). Its flavor also reminds most people of celery, but it is stronger, more complex, and more aromatic. Personally, I like it a lot. Beneficial insects like it too.  If lovage were widely known, my guess is that its strong flavor would generate either a “love it” or “hate it” response in most people; nothing in between.

The plant belongs to the same family as carrots, parsley, and dill.  Its leaves, stalks, seeds, and roots are all edible. In the past, candied stalks and roots were used as a remedy. Leaves work well in salads, soups, and stews. Ancient Greeks chewed the leaves to improve digestion. Hildegard von Binden used lovage as a culinary herb, and recommended it as a remedy for colds, heart problems, and abdominal pain.

Thanks to its name, lovage also has a reputation as a love potion. I am not sure about the effectiveness ofthe potion, because it turns out the name of the herb is the r

esult of a semantic mix-up.  As I have learned, the original Latin name of the plant was Ligusticum, meaning ‘from Liguria’ (a region in north-western Italy). Ligusticum somehow later morphed into Levisticum. Subsequently, the plant was called loveche in Old French and loveache in Middle English. The non-poetic truth is that modern English ended up with the word lovage due to a distortion of the plant’s Latin name, and not because it had anything to do with love. Folk etymology was wrong, but regardless I still love lovage…

This soup gets its unique flavor from lovage leaves. If you can’t find lovage, use parsley or celery instead. Your soup will be tasty in a very different way. 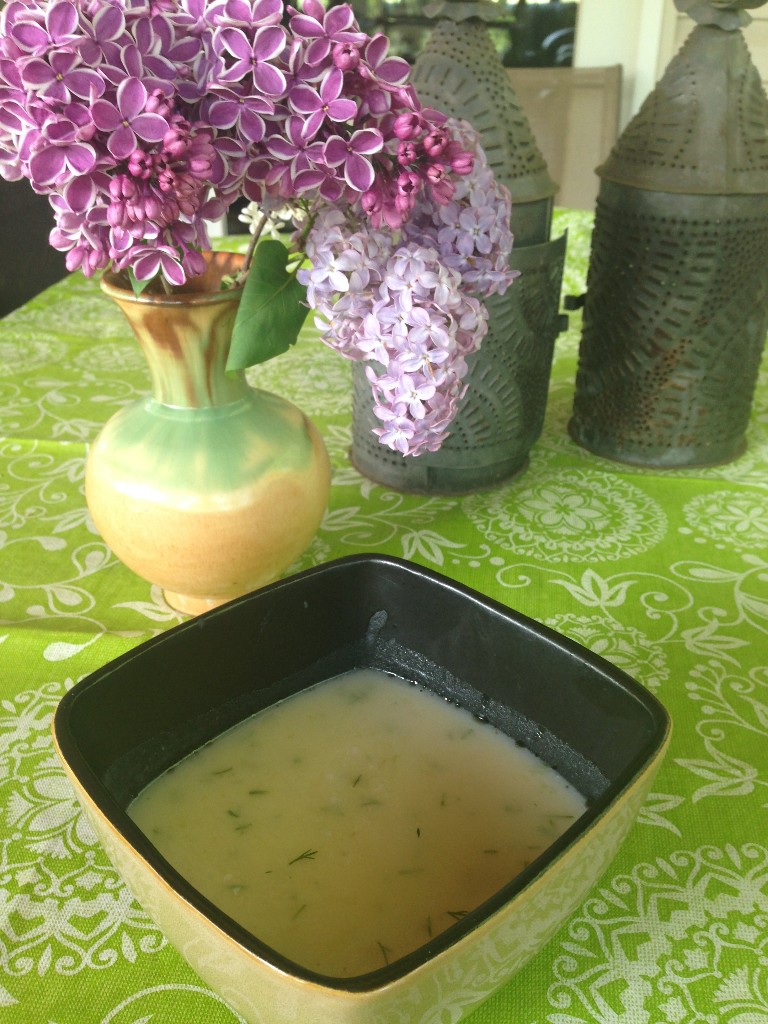 In a soup pan, heat the olive oil. Add the onion and gently cook until translucent. Add the potatoes and stir well. Add the vegetable stock and simmer for 15 minutes. Add the whole lovage leaves and simmer for 5 more minutes or until the potatoes are tender. Take the soup off the heat. Remove the lovage leaves and use a hand blender to puree to soup. Check the seasoning and add salt and pepper to taste. Add dill and vinegar, and return the soup to the heat for a few minutes. Do not boil.  Put soup into serving bowls and garnish with chopped lovage. Serve with a dollop of sour cream if desired.