Our cooking instructor, Eva Szigeti, traces the history of the Thanksgiving menu and gives us ideas of how to incorporate the past into our present fare, including a recipe for acorn squash custard.

I was always interested in history. Becoming an archeologist was one of my childhood dreams that did not come true. With Thanksgiving approaching, I decided to do a little digging. Together with my children, I wanted to learn more about what food historians have to tell us about the origins of the Thanksgiving menu.

Food history seems to be a fun interdisciplinary field. It examines food in the context of cultural, historical, social, and economic circumstances. Its methods include archeological research and go as far as, for example, studying pollen found at the Plymouth Plantation. The goal of this particular inquiry is to find out what the Pilgrims grew in their gardens. I am not sure how hundreds-of-years-old pollen gets preserved, found and identified, but I find this kind of research fascinating.

As we all know, the origins of Thanksgiving celebration go back to 1621. The three-day feast of Pilgrims and the local Native Americans was, of course, not called “Thanksgiving”, and it was not intended to start a tradition. It was simply a harvest celebration (present in most cultures in some form) with festivities that we hardly miss today (think: hunting). Thanksgiving was later celebrated on and off, but only became a tradition and a national holiday much later. This was partly thanks to the perseverance of a woman named Sarah Josepha Hale. I have learned in the course of my “digging” that she was the editor of the popular women’s magazine Godey’s Lady’s Book—sort of the Martha Stewart of her time—a trendsetter for everything household related. Sarah Josepha Hale petitioned 13 presidents (beginning in 1827) with the idea of establishing Thanksgiving as a national holiday. President James Polk hosted the first Thanksgiving dinner in the White House in 1845, but the holiday wasn’t officially established yet. According to the Smithsonian Magazine, Hale pitched the idea to President Lincoln as a way to unite the country in the midst of the Civil War. This time it worked. Lincoln made Thanksgiving a national holiday in 1863.

Food historians tell us that they are quite sure about the foods that were not on the table during the 1621 harvest festival, but there is less certainty regarding what foods were actually on the menu.

We know that a lot of meat was eaten; the kind of meat and poultry that most likely won’t be part of our Thanksgiving dinner.  We would like to think that the Pilgrims enjoyed some turkey as we do today. Perhaps they did, perhaps they didn’t. There was an abundance of wild turkeys in the area, but there is no proof that turkey was actually served during the 1621 harvest celebration. If it was served, it certainly wasn’t the centerpiece of the dinner table.  Local wild fowl (ducks, geese, possibly swans) were prepared, and we know for sure that there was plenty of venison to go around. Seafood was certainly part of the menu; most likely lobster, oysters, clams, and possibly bass.

As for the preparation of the food, boiling and roasting were the two methods employed. Big pieces of meat or whole birds were roasted on spits, while the open hearth in the house was used for other cooking.

The birds might have been stuffed with onions, herbs and nuts, but not wheat bread stuffing. The Pilgrims did not have wheat flour, so bread stuffing was off the menu and so were pies. Not only there was no flour, there wasn’t any butter for the pie crust or even an oven for baking. At that time, the Pilgrims hadn’t constructed an oven yet. But they did not give up on pumpkin based desserts. They improvised by filling a hollowed out pumpkin with milk, honey and spices, and roasting it in hot ashes. Voilà, pumpkin custard!

Locally available vegetables such as wild onion, leeks, squash, Jerusalem artichokes, and beans were cooked. Probably some English crops (turnip, cabbage, parsnip, onion, thyme, rosemary, carrots) grown from seeds brought from Europe were available. To know for sure, we need the above mentioned pollen research.

As for other side dishes, corn in the form of porridge and sweet corn pudding was served (but not corn on the cob). Two of our favorites, potatoes and sweet potatoes, can be ruled out. Potatoes, originating in South America, and sweet potatoes from the Caribbean, had yet to reach North America. Cranberries were available and perhaps present on the table, but not in the form of sweetened cranberry sauce. Today we take the availability of sugar for granted, but the Pilgrims had none, since by the fall of 1621 they ran out of the sugar brought from overseas.

Over the course of history, The Thanksgiving menu has evolved into what it is today. There was a roasted turkey and there were mashed potatoes on the menu printed in The 1896 Boston Cooking-School Cook Book. At the same time, this menu included many items that we hardly associate with the Thanksgiving dinner (oyster soup, sterling sauce, chicken pie, and fruit pudding).

Most of us perceive Thanksgiving not only as a harvest festival but – more than anything else – a family celebration.  On our Thanksgiving table, food history meets family history. Each of our menus is most likely a combination of the usual Thanksgiving menu items with those unique to our family. Like every family, every menu has its own story worth “digging” up. 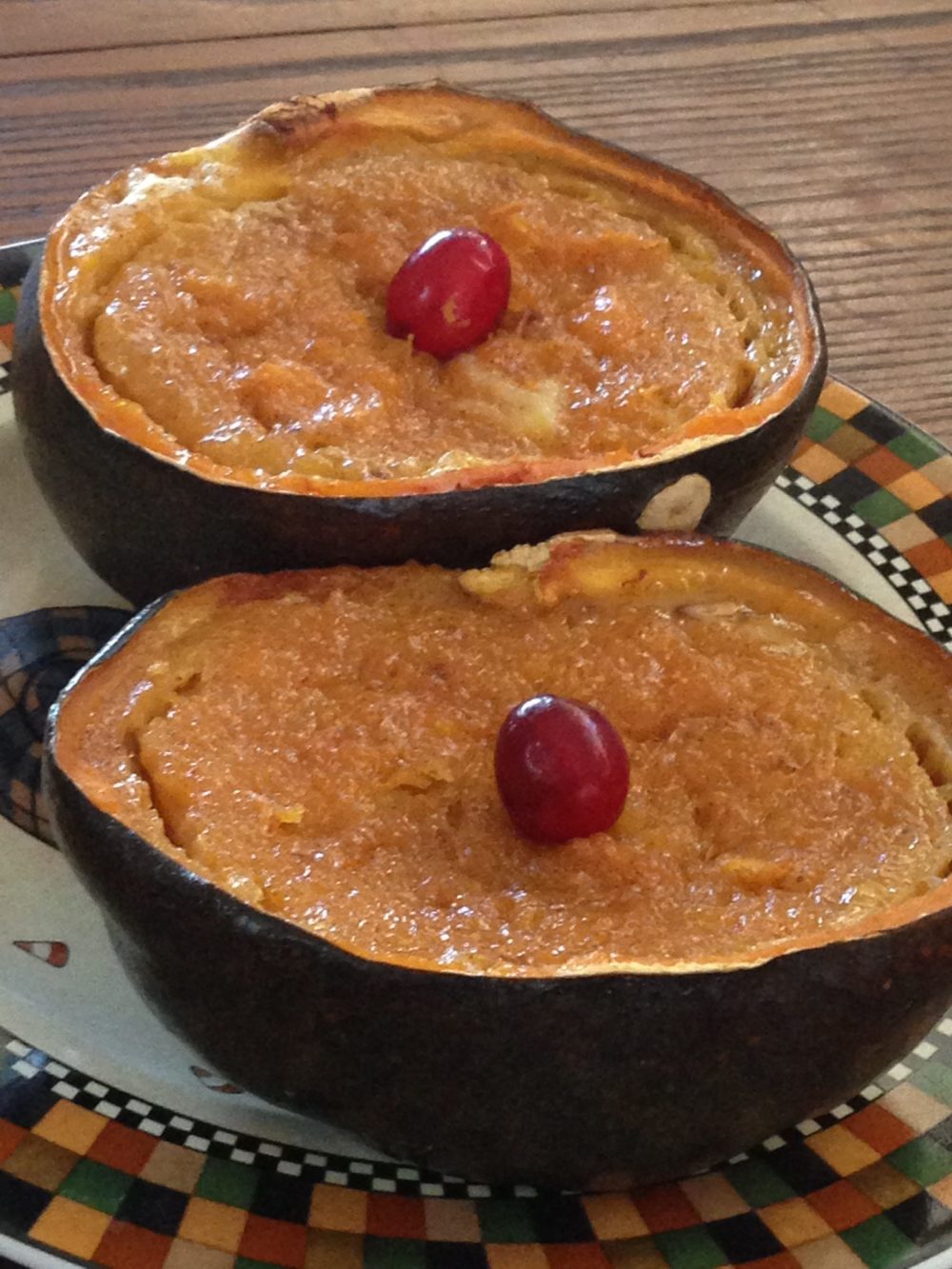 My children were intrigued by the idea of pumpkin custard baked in a pumpkin shell. We decided to improvise and to create our own recipe for acorn squash custard. We liked what we made. This recipe is a tasty and healthy alternative to a more conventional seasonal dessert.

Cut the squash in half. Using a spoon, scoop out the seeds. The seeds won’t be needed for this recipe, but they can be roasted and enjoyed as a snack.

Scoop out about half of the squash flesh and put it in a small mixing bowl. The squash shell will serve as a baking and serving “dish” for the custard.

In another bowl whisk the egg, then add milk, maple syrup, cornstarch, vanilla extract, and the spices. Mix together.

Put the two halved pieces of squash into a small baking dish.  Carefully fill the squash with the milk and squash mixture. Bake in a preheated oven on 350 F for 30-40 minutes or until the filling is set and the flesh around the shell has soften.

The custard can be enjoyed warm or cold.