The thing about ice fishing is you only do it when its block-hard cold. My dad, Walt, used to say ice needed to be six inches thick for good fishing. Six inches or more was the thickness of a block of ice the community used to cut out of the ice ponds to store in their ice houses, for use later in the warm season. Six inches was solid enough to hold any number of fishermen who chopped holes into the ice for fishing through. Some fellows chopped with a little ice hatchet. Others had a long-handled auger that they worked like a big hand drill. But Walt had my grandfather’s ice chopper. This was a three foot long iron handle with a straight forged blade, about five inches wide. The ice chopper was made by my grandfather at the Ramapo Iron Works years ago. The old man attached a solid blade to a switch machine handle. Sometimes the ice chopper needed some extra persuasion, so Walt would whack it with the back end of his hatchet and chisel his way down into the block-hard ice. Mostly Ricky and I stood and watched him chopping holes into the ice.

Once he cut a half dozen holes or more, spread out over a hundred-foot section of lake ice, we went about setting our tip-ups into the holes. These were little cross sticks of narrow wood that were rigged with a small reel of coarse line. The line was weighted with a lead sinker and hook and baited with worm or corn. You dropped the line into the hole and set the tip-up across the hole, such that if a fish took the bait and pulled, a little flag sprung into the air and a small sleigh bell jingled. Usually the fish caught itself, but then you had to pull it up through the chopped hole and get it off the hook. This was all a very cold way to fish. You were always having to pull off your gloves to grab the fish and de-hook it, or to re-set the bait and rig the tip-up. We also had little fishing poles to try and catch fish through the ice holes. 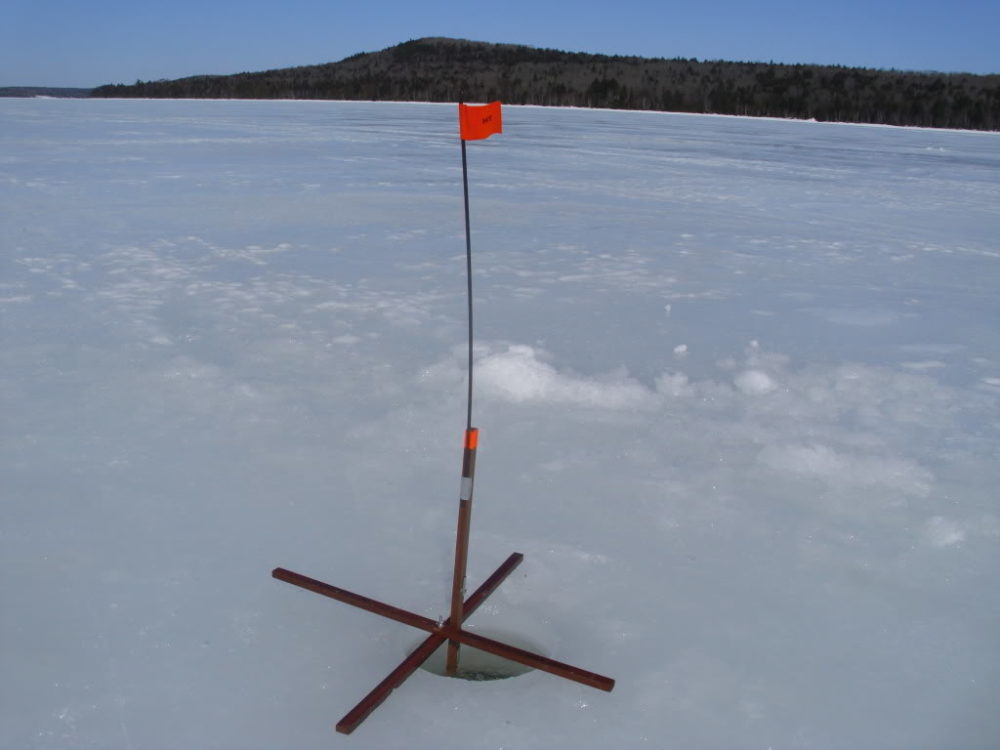 Walt took us ice fishing after he came home from work, so we usually didn’t get it all set up until early evening. Our tip-ups were out in a wide circle around us and we three sat on up-turned buckets around three small holes with our short fishing rods. Between us, Walt set up a wood camp fire on an open bucket that stood up off the ice on three short metal legs set on wooden pads. We were always amazed at how we could have a fire out there on the ice and how it didn’t melt its way through into the lake. And we were very grateful for the fire for, as I said, ice fishing was only done when it was block-hard cold.

This one evening, after we had caught a mess of perch and sunnies, me and Ricky were getting antsy with the drop in temperature. Walt added some more fire wood, but this only helped to warm up our front sides and then we had to turn around to warm up our back sides, only to find our front sides were chilling up again. Walt re-lit his pipe and started to tell us about the monster catfish in this lake. He spoke with the pipe clenched in his teeth. Each word sent out a little puff of white smoke.

“Some old-timers say there’s monster catfish in this lake. They call them granddaddy bullheads. These big old white bellied catfish seldom come to the surface but for late at night. In the winter, when the lake is froze over like it is tonight, they rest down deep sucking air out of the water. They don’t bother to take our bait, they just watch to see some other regular size fish steal our bait and then the big old bullhead cat fish rise up and swallow that regular size fish whole.”

Ricky rubbed his hands together and said, “So why don’t we take one of them regular size perch and bait our hook with that and maybe that granddaddy monster catfish will go for it!”

Walt said, “Well, that could be a good idea…and it might even work, but the problem is we’d never be able to pull one of them granddaddy bullhead catfish through our little fishing hole.”

Ricky said, “They is that big, Walt?”

Walt said, “Oh Ricky, they is fierce bigger than our fishing holes in the ice.”

We got up to check our fishing holes, as they sometimes froze over and the new ice needed to be cleared out. Just as we stood, one of the tip-ups started to jingle furiously. Rick and I ran over to it and together just managed to catch the tip-up as it was starting to break apart from the strike beneath the ice. We pulled, but the little reel broke apart, so Rick wound the line around his wrist. Then a great splash of water and ice thrust up through the little fishing hole and for a moment we saw the flash of a massive white belly slam against the hole and roll over such that we saw its black dorsal fine. Then the line went slack and we both fell over. Walt came over and picked up what was left of the mangled fish hook. It looked like it had been chewed. We looked up at Walt and he said, “Well sir, that was one of them granddaddy bullhead monster catfish!”