Listening to the Land

Chuck Stead, our beloved camp storyteller, recounts a day spent coping with the floods of spring and learning an important lesson.

After the winter thaw, there come spring showers. They are gentle and deceptive and very inviting. The thing is, the earth is still saturated with a soaking from melted winter thaw, and spring showers have no place to go but over land, downhill. By the third week in the month, vernal ponds and freshets emerge all across the woodlands and eventually make their way into neighborhoods, flooding yards and seeping into basements. This is the soaking that brings forth a celebration of life, but it can also undermine the concrete and stone beneath our houses. 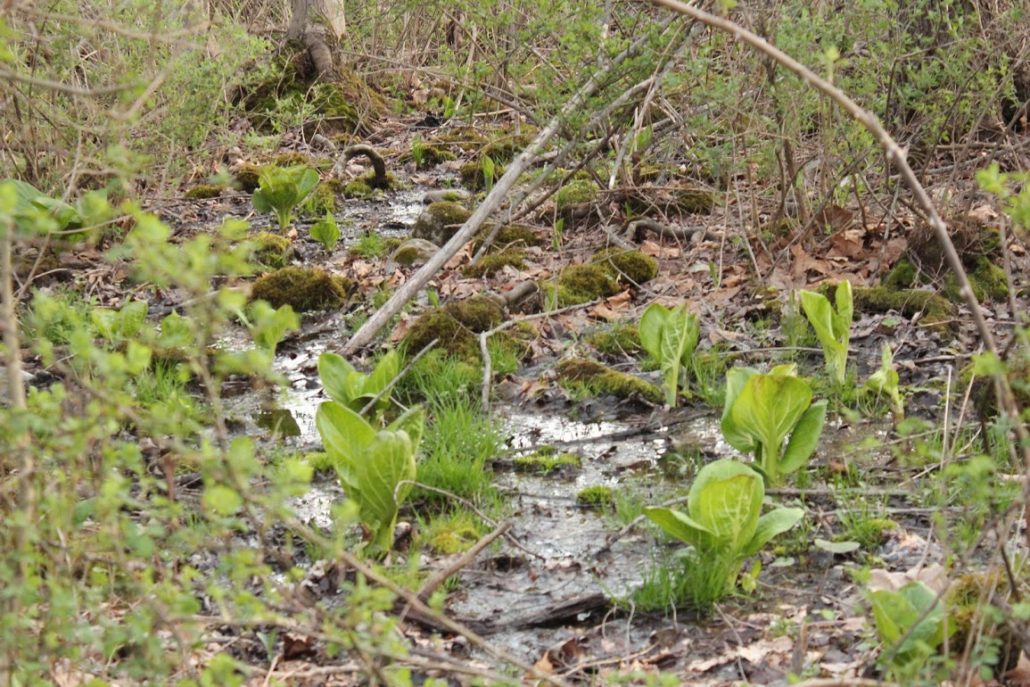 Uncle Mal had us kids (Me, Ricky Cramshaw, and Cindy Maloney) climb into the back of his International Pick-Up truck, where we found three red rubber buckets and three oversized sponges. He told us we were on a mission of good will and that we were to be rewarded with ice cream at Hagedorn’s Soda Shop. We drove down Fourth Street, over the Thruway Bridge, across the railroad tracks, and onwards to Suffern. We sat against the back of the cab and waved at the people driving behind us, as we watched the red buckets roll around in the truck bed. As you drive into the Village of Suffern, the road wraps around Nordkoff Mountain, takes you under an over pass, up Wayne Avenue, and under another over pass. Each time we drove under one of these, we looked up and watched the pigeons sail about just under the massive steel girders. The air along the road was a sweet mixture of early spring fragrance laced with concrete dust and a dank iron odor. Uncle Mal pulled the truck into a short yard that had a steep driveway dropping off toward Lake Antrim. We climbed out of the truck and found we were at the home of Mrs. Sutherland. Mal handed us each one of the buckets and one of the big sponges. We then followed him to the front door where he knocked twice and then opened the door and called out her name, “Mrs. Sutherland, we’re here!”

She came from the back room kitchen. She was a smallish woman who looked as if she didn’t want company. She was shaking her head and staring at us. I could not guess her age as she seemed older to look at but was younger to listen to. She said, “Oh, now look at this crew. What are they up to?”

Uncle Mal said, “We’re going to take a look at that big puddle in the basement and figure out where it’s coming from.”

She looked up at Mal and said, “Oh now I can’t have these kids getting all dirty down there in that old basement.”

Mal said, “Maybe you can’t, but I can!” Before she could protest he pushed his way past her and had us follow him into the kitchen, through a door and down a set of plank steps. We arrived in a basement that was walled in concrete and stone and only partially floored in concrete, with the rest being the dirt. Half the floor was covered in water which was the color of cocoa. Mal took up a mop and bucket with a double roller ringer on it that was sitting at the edge of the big puddle. He started sloshing it around, soaking up the cocoa colored water and ringing it out into the bucket, which he quickly filled. He told us to wait until he got most of the water out and then we were to sponge up the rest. He dumped out four buckets full of water before we could get started. He had us pat the floor water with the sponge, which caused the water to soak quickly.

Mal went back upstairs to talk with Mrs. Sutherland while we, down on our knees, continued our work. We kept getting little bits of grit, stones, and sand soaked up with the water, and our bucket mixture looked darker than the water Mal had mopped up. It was hard, dirty work, but it didn’t take all that long. Mal came clamoring back down the plank steps and was very pleased to see that we had completed the task. He then got down on his own knees and studied a seam in the floor right along the edge of the concrete. He pulled out a flashlight from his baggy trousers and scrutinized the seam with the light beam. He looked back at us and said, “That’s where it’s coming through. Only thing to do is seal off the rest of this floor.”

We went outside and dumped our buckets while Uncle Mal explained what he had discovered to Mrs. Sutherland, who was now smoking a cigarette by her back door. She thanked us and told us we were good workers. We walked back to the truck, and I noticed that down the narrow driveway there was an old open garage that was full of interesting looking stuff. But it was time to go. We climbed back into the truck and Mal rode us into the town.

At Hagedorn’s I ordered Vanilla, Ricky order Chocolate, and Cindy got Strawberry. Uncle Mal got a cup of coffee and drank it without any milk in it. He told us that Mrs. Sutherland’s husband had passed away and that he and a couple of fellows were going to fix up her basement, because it leaked every spring and sometimes again in the summer. I said I didn’t think Ricky, Cindy, and I had been of much help and Mal said, “Well what do you want me to do, take the ice cream back?”

Cindy said, “All’s we did was sponge up some water and you probably could have done it faster than us anyway.”

Mal thought about this and nodded, “Well, maybe I could’ve…” he said. He sipped his coffee and then said to us, “But you see, you kids got to learn something about the old ways. You see, we’re a people of the land. And we act according to what the land is doing. It’s cold and freezes and we got to cope with it; it gets warm and floods and we got to cope with that. And some people, they don’t cope as well as others. So you got to pay attention to the land and it will tell you when you need to go out and help those who need the help. You see, it ain’t us against the land, it’s just us listening to what the land has got to tell us.”

We finished our ice dream and uncle Mal paid the bill. He turned around on his swivel stools and he said, “The world is changing and I think the old way of listening to the land is being forgotten.”

And even though we really had no idea what he was talking about, we promised him that we would never forget it. Mostly I think we promised this because the ice cream was good.