Nature Place cooking maven Eva Szigeti shares a pickling recipe with us for this month of October.

The gardener and the frost are no friends, certainly not during the growing season. As the season of gardening is coming to an end, the gardener is preparing for the upcoming months when winter dictates the rules. There are many decisions to be made before the first frost. The gardener watches the weather forecast, considers the micro-climate of the garden and makes decisions. Freshly picked produce is of course the best, so we strive to extend the harvest’s garden life for as long as possible. It sometimes means taking a risk, because even a light touch of the first frost will destroy the late harvest of cold-sensitive tomatoes or peppers. Most gifts of the garden need to be harvested before the frost puts its hand on them, but some plants survive the first cold spell or even benefit from a little frost.

Some members of the cabbage family not only grow well in cool conditions but they react to mild frost by producing sugars. Some root vegetables (parsnip, celeriac, carrot), on the other hand, convert their existing starches into sugars after a frost or two. So late fall offers a perfect window of opportunity to feed some frost-bitten kale, Brussels sprouts or parsnip dishes to our picky eaters. The frost is on our team in this case.

One of my favorite cold weather vegetables is cauliflower. Cauliflower is a brassica, cousin of cabbage, broccoli, and kale. Although we refer to it as a vegetable, the part we eat, the “head”, is a closely packed arrangement of undeveloped flower buds. 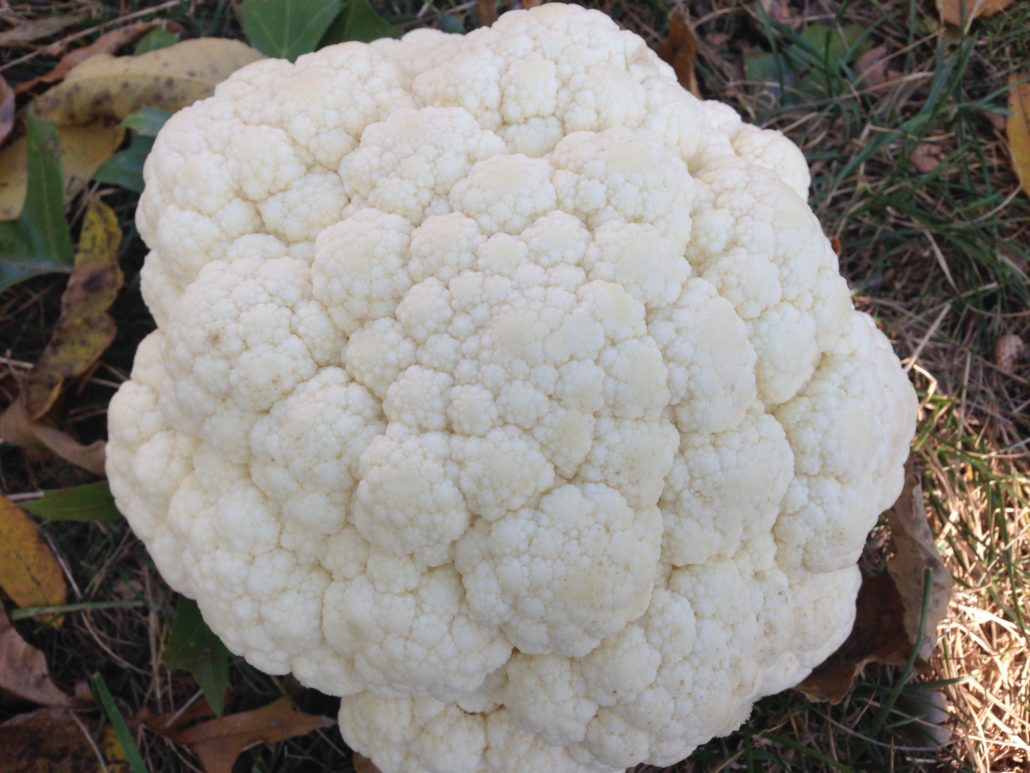 Fall is not only a time of harvest but also a time when we focus on preserving the surplus for the upcoming winter months. Pickled cauliflower is a must in our family.

Although those who have never made pickles may feel intimidated by the idea, it is a fairly simple process worth trying. If we involve children, it will be time well spent for sure. “Quick pickles” require no canning but they need to be stored in the refrigerator and will last for only several weeks. For long-term storage, the jars need to be canned. It adds some extra work and time to the project but as a reward we get jars of pickled vegetables that don’t need to be refrigerated and that will last through the winter.

Armed with sterilized mason jars, a large stockpot for canning, a head of cauliflower, onions, peppers, canning liquid, and with two young helpers at my side, I am ready to start.

As we wash the cauliflower, take the florets apart, and wait for the pickling liquid to cool down, we talk. The children start to wonder about the word itself. Where does ‘cauliflower’ come from? We start playing word detectives trying to figure out the secret of the word. The “flower” part doesn’t require much guessing. The “cauli” part is harder. We look for a dictionary. The first element of the word comes from the Latin caulis “cabbage” (originally “stem” or “stalk”). It was adopted into Germanic languages and is the source of the cole in coleslaw and of Scottish kale. We learn that the words cabbage, kale, cole in coleslaw, and cauli in cauliflower all share the same origin.

Leaving linguistics behind and returning to culinary activities, lets take a look at cooking methods that can be used to prepare cauliflower. It can be sautéed, steamed, roasted, fried or stir-fried. Cauliflower, especially when roasted, makes a great cream soup. Eat it pureed, put it in a curry or make a cauliflower spread. Recently, I saw a recipe for cauliflower steak: basically a large chunk of roasted cauliflower served as one would serve a steak. Of course, eating cauliflower raw works too. Because of their nice shape and color, the small florets make great crudités. And lets not forget the leaves and stalk, they don’t have to be thrown out, they can be used in stocks.

The acidic smell of vinegar is tickling our noses as we add the pickling liquid to the mason jars packed with cauliflower florets. The closed jars are now ready for the canning pot. We will have crunchy, tangy cauliflower to brighten our winter meals.

The discussion about cauliflower doesn’t have to end at the dining table. The artist in us will stop to admire the beautiful, intricate surface pattern of cauliflower’s florets before putting them into the cooking pot. The scientifically minded cook can go on and explore cauliflower’s distinct fractal dimension (which involves the pattern of the “head”) noticed by mathematicians. Or one can use the plant to study the golden ratio, since another quality of cauliflower is that the angle between “modules” (in the kitchen we call them simply florets), as they become more distant from the center, is 360 degrees divided by Phi. 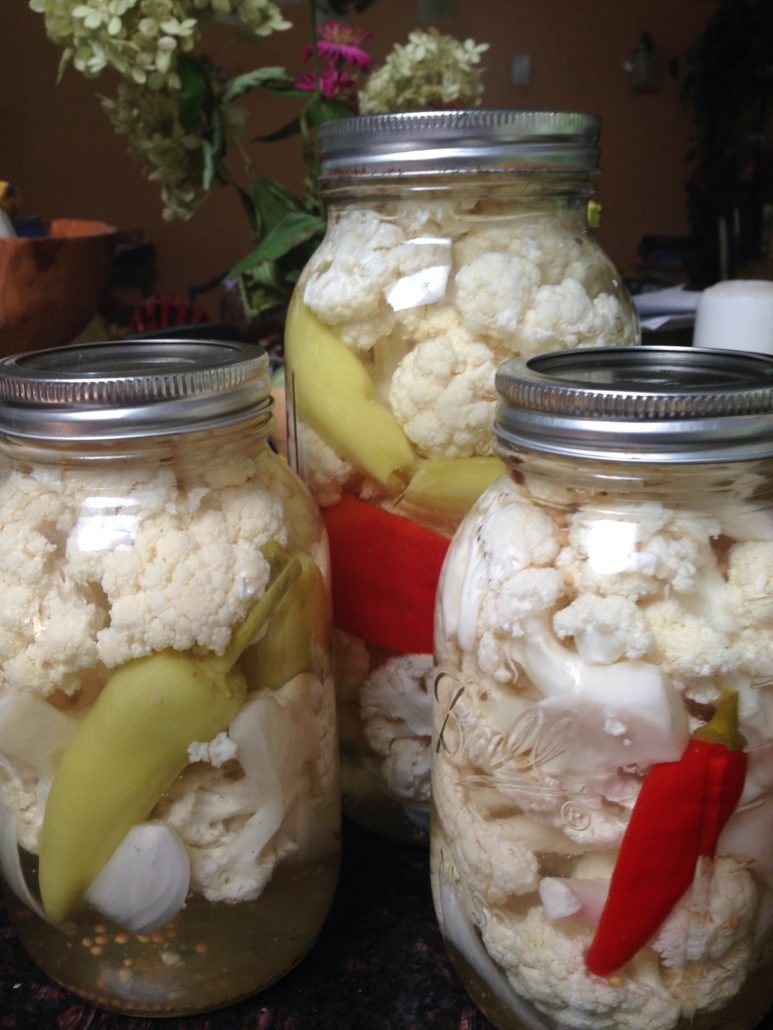 Make the pickling liquid. Combine water, vinegar, sugar, and spices in a nonreactive pot and bring to boil. Gently simmer for 3-5 minutes. Make sure all the sugar is dissolved. Let the liquid cool down.

Have five sterilized one-quart mason jars with lids ready. Prepare the cauliflower. Cut off the outer leaves and any brown spots. Break the cauliflower into small florets. Wash thoroughly.

Put a few pieces of onion into the bottom of each jar. Fill the jars with cauliflower florets, trying to pack them as closely as possible. Add a few strips of red bell pepper. For spicy cauliflower add 2-3 cayenne peppers per jar. Fill the jars with the pickling liquid. (The amount of liquid you will need depends on how tightly your jars are packed. You may have some liquid left.) Put the lids on.

If you are making quick pickles, you are done. Refrigerate for at least 3 days before opening. Keep refrigerated at all times. Kept in the refrigerator, quick pickled cauliflower will last for several weeks.

For canned cauliflower proceed to the next step:

Use a pot large enough to hold five mason jars. Put the jars into the pot. Add water to the pot. The water level should be around two inches high. Cover with a lid and bring the water to a boil. Boil for 5 minutes. Turn the heat off and keep the jars in the pot until they cool down. This will take several hours or overnight. Take the jars out of the pot. Your pickled cauliflower is canned. It does not need to be refrigerated and it will last for months. Wait at least a week before opening your first jar.