There were many Thanksgiving traditions in my home village of Hillburn; along with the preparation for a holiday dinner there was the beginning of deer hunting season, usually around the last week of November. Shotguns were brought out from closets and gun cabinets, buck knives sharpened, and a fresh pair of woolen socks was purchased. We kids were encouraged to gather acorns weeks earlier as well as hickory nuts and walnuts, both of which were encased in an outer husk and something of a mess to open. Actually, most folks preferred the store bought walnuts as they were easier to open and less messy than our local wild ones. We were also encouraged to collect the most beautiful red and rust colored leaves of maple and oak as well as golden yellow birch leaves, for decorations that would curl and darken in our homes. Baking started some days before Thanksgiving which filled the house with the thick sweet aroma of apple and berry pies. It occurred to me that morning coffee smelled best in November, perhaps it was the association with hunting season or pumpkin pie or perhaps it had to do with the chill in the air. It was a few days before Thanksgiving that Ricky Cramshaw and I first tasted coffee. 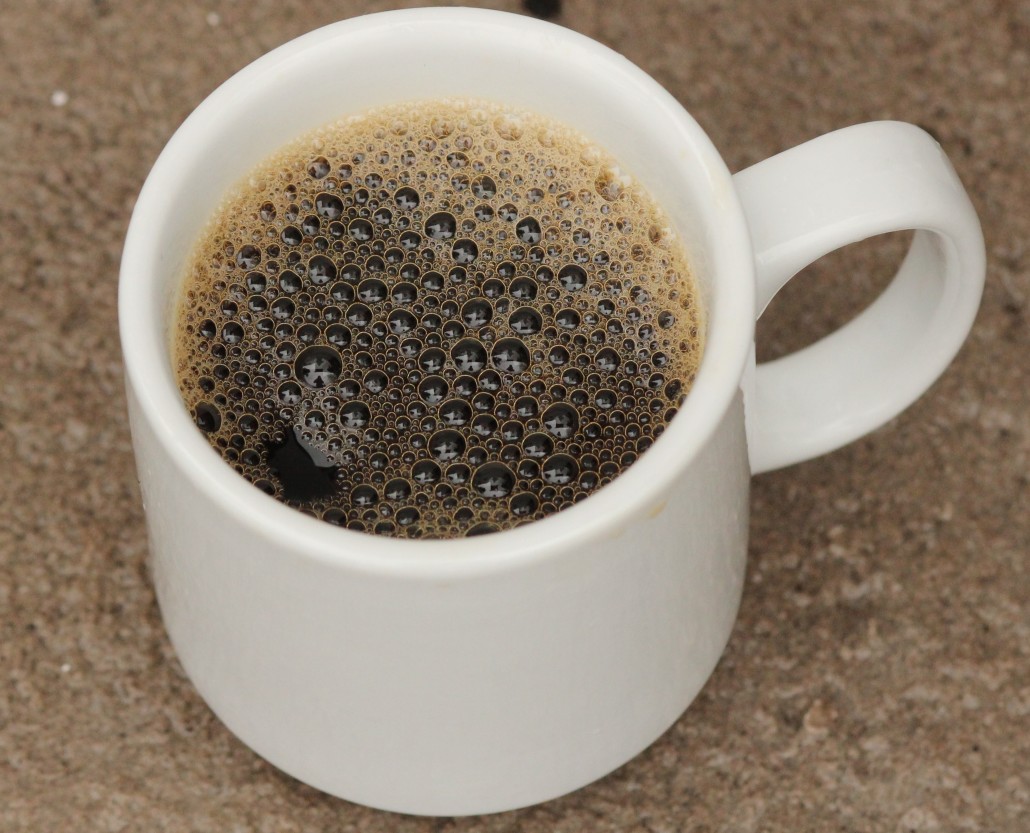 We had debated this for weeks. It seemed to us that this thick warm wonderful aroma of freshly brewed coffee in the morning was an invitation to a sumptuous taste hoarded by adults. We asked my dad, Walt, why kids didn’t drink coffee. He thought about this and told us that as a boy he often drank coffee and supposed that it fell out of favor for kids as soda pop took over. So we asked him to brew us a pot. Walt put up some coffee in his G.E. electric percolator. We huddled together and studied the little glass top of the pot eagerly waiting for the first spit of caramel colored caffeine to strike forth, when it finally did we cheered. When it was ready he poured out two cups of the black elixir and set them before us on the round Formica kitchen table. He put a pint of cream and a sugar bowl before us and two spoons. He said, “There you go boys, there’s your cup of Joe.”

Ricky said, “I thought it was coffee?”

“Well sure that’s what it is.”

Walt sighed and said, “Well, you see during World War Two our soldiers were called G. I. Joe and over in France they got to drink some very fine, very strong coffee.”

I asked, “Was it good coffee they drank?”

“Oh sure it was. It was fine Arabian and Turkish coffee, some of the best in the world. But they missed their American coffee, which doesn’t grow here anyway, its just brewed American style. So when they got a cup of American coffee they called it ‘Joe’, you know cause it was their brew for G. I. Joes.”

I leaned over and inhaled the deep scent rising from my cup of Joe. I said to him, “So this year I can have a cup of coffee with my apple pie on Thanksgiving?”

He said, “Lets say you taste a little of that first.”

I took hold of the cream bottle and poured some into the black coffee and watched tan clouds bellow out in the drink until it was all a tan brown color. Ricky shook his head, skipped the cream and spooned two teaspoon of sugar into his cup of Joe. Then he looked at Walt and said, “Maybe a little more?” Walt nodded. Ricky then shoveled three more spoonfuls into his cup. Now we were ready. I leaned over and raised the cup to my lips and sipped just as Ricky took hold of his and drank. I don’t know which one of us choked first but whatever we drank blew back across the table and sent Walt into tears of laughter. I can only describe it as the taste of a horrible mistake in side of my mouth. Ricky later said it was like drinking a poison Oreo Cookie. Needless to say coffee was not on either of our menus that Thanksgiving.