The Traveler and the Cook: At the Airport

In her new series, our cooking instructor, Eva Szigeti, writes about airport experiences that went beyond the expected…

For the weary traveler, airports are rarely fun. Usually, we don’t think of airports as places where the real travel experience happens. They are just the unavoidable necessary steps toward our travel destinations, where all the fun and experiencing is supposed to happen. If time spent at an airport becomes memorable, it is usually for the wrong reason: a missed plane, hours of delay, lost luggage…

That being said, I’d like to share two very different airport-related experiences that don’t fit this equation.

One of them happened years ago in Paris Orly Airport. As I was absent-mindedly hurrying through the airport, I suddenly became a witness of a tiny moment in some strangers’ story and felt deeply touched by it.

I had very little time to catch my connecting flight. Navigating the corridors as a little piece of an anonymous moving crowd, the only thing on my mind was to get to the right gate on time. But then, suddenly, I had to stop. We all had to stop, and readjust our minds, our perception of the world—because the following happened: The column of people in front of me stopped moving.  Something was wrong. I could see the escalator at the end of the narrow corridor—the only available exit route in front of us. The escalator was running and there was a crowd of people seemingly waiting to get on, but the steps of the escalator continued their rhythmic ascent without carrying any people.

The group at the very front seemed to be traveling together. Their clothing stood out. They weren’t dressed for the cold Parisian winter day. Rather, some wore short-sleeved T-shirts; others wore traditional African clothing made for a warm climate. They seemed scared and indecisive. The older members of the group were discussing something. Suddenly a teenaged boy stepped out of the group and turned back as if asking for the approval of the elders. He then stepped onto the escalator and went up. Shortly after, the others hesitantly followed the young boy. I realized that escalators were not part of their experience prior to this moment. Confronted with one for the first time, they did not know what to do until the curiosity of the young boy grew stronger than his fear, and he showed the group the way…

I do not know what was to follow for these families after they arrived at the top of the escalator. Perhaps they were on a vacation, or perhaps they were fleeing their homeland. I have often wondered how their lives unfolded since that cold day in Paris. I hope they found their way and their place.

The other very different and cheerful story involves travelling with my children and their perception of a country, based solely on its largest airport. We were changing planes in Zurich, Switzerland. This time, I didn’t have to worry about not making it on time to the connecting flight, as we had a five-hour layover. I was worried about having too much time. Spending hours in transit after an overnight flight is usually not fun. 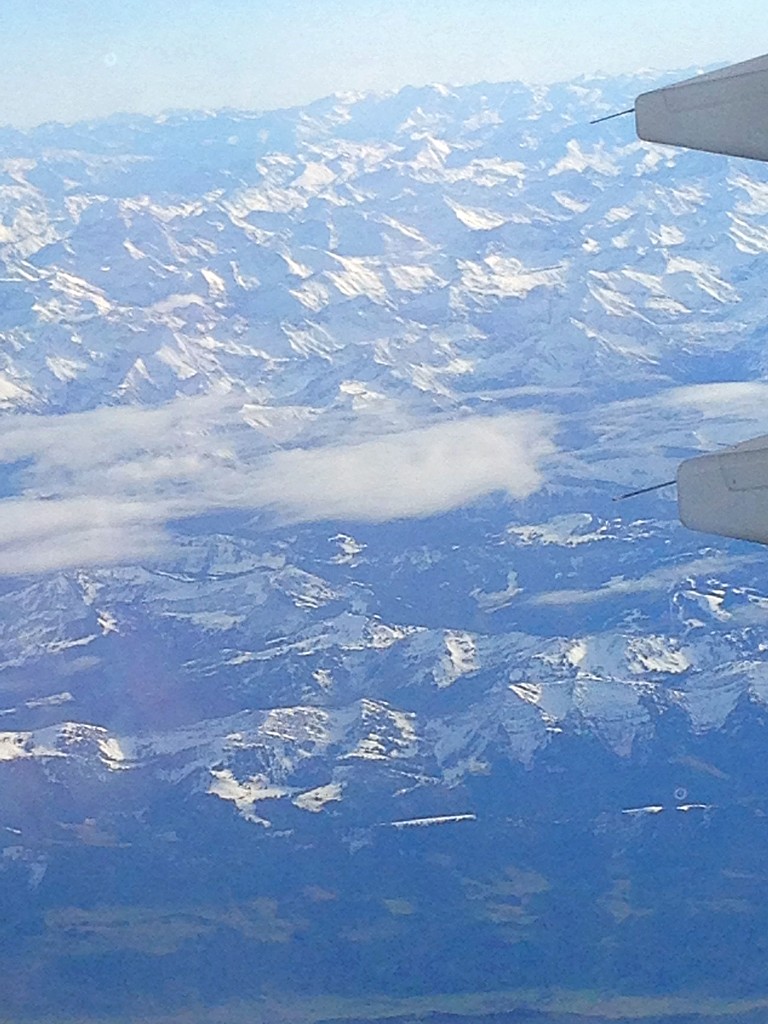 I had prepared. We had plenty of snacks packed to fight hunger and also serve as a distraction. There were a few small toys, books and activity booklets in my backpack, ready to provide a little entertainment. But, in the end, we never took them out. The children vastly enjoyed the airport. The sleepiness was gone and the boredom was lifted as they looked out of the airport windows and past the runways. As far as the eye could see, there was forest, and only forest. We were at the largest airport in Switzerland and it wasn’t surrounded by an urban or industrial landscape, but rather, endless trees. The children noticed it right away. They pointed it out, and they loved it. They appreciated how clean everything was, too. We enjoyed the view for a while, and then it was time for lunch. We chose a deli that imitated the looks of a rustic small town bakery. The soft pretzels with ham a cheese looked so good and tasted even better. A piece of Swiss chocolate for dessert followed. We learned and experienced that there is such a thing as a good airport food – at least in Switzerland. Of course, one pays the price, as Switzerland is anything but inexpensive. 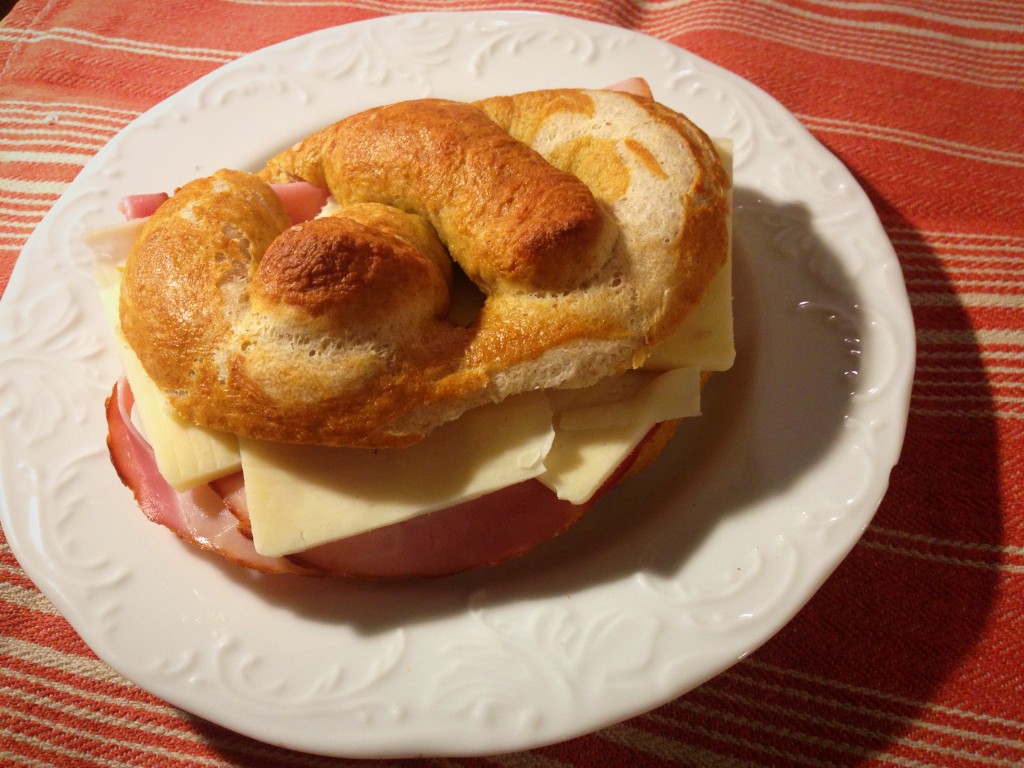 The natural question for my children to ask was: “Why don’t we live in Switzerland?” This country, experienced only through its airport, somehow made so much sense to them. My children now often talk about Switzerland. Since spending five hours at the airport in Zurich, this country has become one of their dream destinations. My daughter started learning Italian, and explained her decision among others things with: “It could be useful in Switzerland”.

So we keep saving for a ‘real’ trip to the country of the majestic Alps, delicious chocolate, and yummy airport sandwiches.

This is a recipe for the sandwiches we enjoyed at the airport in Zurich. Butter, ham, and cheese are a combination typical for Germany and German speaking regions of Europe. 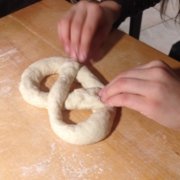 If you are in the mood, you can start with baking soft pretzels from scratch. Pretzel dough is basically yeasted bread dough with a bit of butter in it. The Internet is a good source for pretzel recipes and instructions on how to properly form them. Compared to baking bread or rolls, making pretzels involves an extra step: immersing the formed pretzels in boiling water before baking. This process creates the typical chewy texture of pretzels (and bagels too).

Making pretzels from scratch at home requires some time and a bit of patience, but it can be done, especially if you have helpers interested in playing with dough.

Slice your pretzel in half. Butter both sides. On the bottom part, layer the cheese and ham. Cover with the top half on the pretzel. Enjoy for lunch or pack for your next road trip.