The Way of Things

Chuck Stead, our beloved camp storyteller, gives us a tale of birds, taking care, and the way of things for this month of January.

Come the cold, hard freeze of January, Grandma Cramshaw supplied her back yard bird feeder with sunflower and safflower seed. She got angry with anyone who left bread out for the birds, as she said that bread is ‘people’ food and should not be eaten by the feathered ones. Ricky told me that his grandmother felt bread didn’t go down a bird’s gullet very well. I asked him what a gullet was and he said it was the bird’s throat. I asked him why they didn’t just call it a throat and he said because it was bird talk.

“You mean gullet is a bird word?”

He said, “Yeah, sometimes you hear the crows say ‘gullet gullet’. Didn’t you ever hear them say that?”

“I guess so…but why are they saying ‘throat throat’?”

Ricky said, “I don’t know. Maybe because they are talking about two throats?”

We watched the old woman go out into her little backyard right near to the Thruway fence. There she climbed up a short step ladder and dumped a portion of sunflower seeds into an open tray on top of an iron pipe. A foot below the tray was a wide, metal pie pan such that a squirrel could not shimmy up the pipe and get around the pie pan. Then down a little ways from the pie pan was a lower tray in which she dumped a portion of safflower seeds. Below this tray there was another metal pie pan just about two feet off the ground. The whole thing looked like some sort of antenna for a spy satellite.

The sunflower seeds in the top tray were all black. She called them ‘oilers’ as they were Black Oil Sunflower seeds. She said they were for the chickadees, but really all kinds of birds went for the ‘oilers’. We saw doves, robins, catbirds, jays, and even some crows go for the top tray. The lower tray looked light-colored, as safflower seeds are a dirty white. This tray was for the cardinals, as Grandma told us cardinals were very fond of safflower seeds. She also didn’t mind this tray being closer to the ground as she believed squirrels were not too keen on safflower seeds. She kept the bird feeder pole stocked up through the cold winter, but put smaller amounts in the trays as spring approached. She said she didn’t want the birds to get lazy and forget about finding their own wild food in the warm weather. 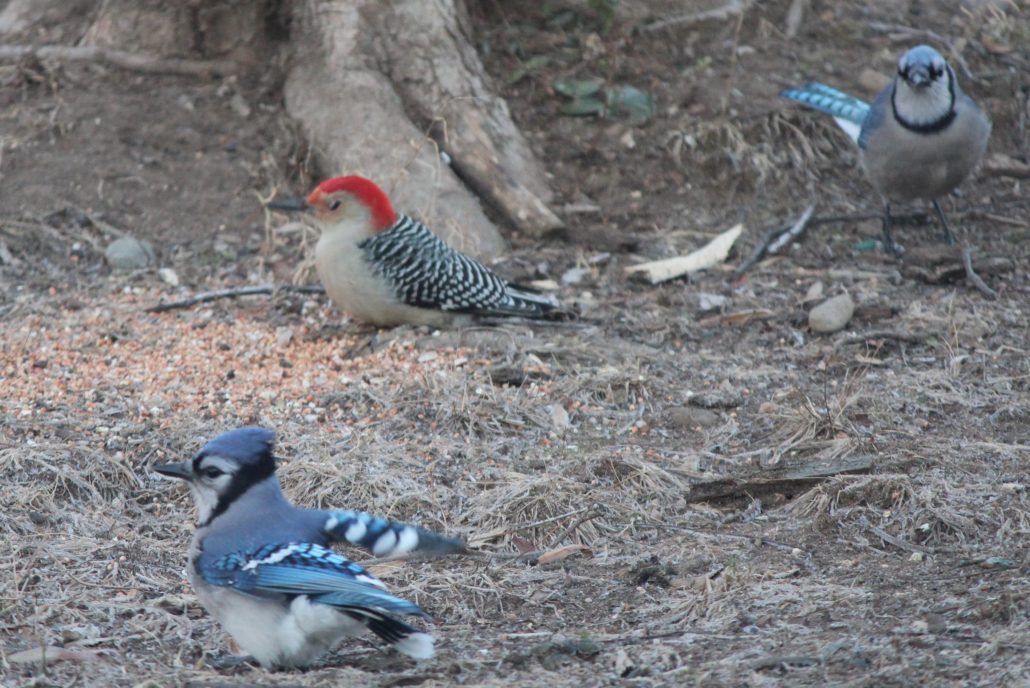 But one freezing cold winter she took to walking up the back ledge of the thruway cliff with a small bag of feed for something. Ricky and I followed her one day when it was pretty dry and not slippery. There, high above the distant sound of the thruway traffic, we found her pouring out a couple of handfuls of cracked dry corn. Apparently there were a pair of ruffled grouse that had moved into the brush just back of the ledges, and she was worried about them.

She said, “No grouse in his right mind would live on top of this thruway cliff. I got a suspicion that one of them is hurt and needs to heal up before they can go on to wherever they were headed.”

Ricky asked her, “So why’s the other one here then?”

She said, “To take care of the hurt one, it’s the way of things.”

He said to her, “Is that what you do? Take care of birds in the winter cause it’s the way of things?”

She looked at us, her weathered face all carved up with wrinkles like an old piece of leather, but not in a scary way, sort of friendly-like, and she said, “Not just birds, Ricky. We only got one job, to take care of things.”

A few days later she found a raccoon was eating the dried corn and she no longer heard the grouse drumming their wings on the thruway cliff. She told us they flew off or got eaten by the coon. She said, “Either way, it’s the way of things.”