OUR BELOVED CAMP STORYTELLER, CHUCK STEAD, TELLS A SUSPENSEFUL TALE OF A GROUNDHOG AND THE PLOT TO OUST THE UNSUSPECTING RODENT…

A few groundhogs had burrowed into the vegetative bank-side of the Fountain Park Pond in our village when I was a boy. The fuss they caused occupied the community for some time. It was one of Cindy Maloney’s little brothers who first spotted the roundish brown and black pawed woodchuck standing near to the remnants of the old pond ice house. It took us a while, but soon we discovered its den deep in the bank-side briers. It was complete with a dirt mound for a front porch, from which Woody-Chuck could observe most of the pond park.

We all got to calling him ‘Woody-Chuck’ when we learned it was a ‘he’, and for the most part no one seemed to mind him. The Keppler brothers tried to shoot him with a pellet gun, but they were notoriously bad shots. Then one of the Danhauser boys set an iron leg hold trap for it but caught Buchanan’s collie instead. The dog had to have surgery to repair its dislocated toe joints. Uncle Mal raged a campaign against the use of leg hold traps in the village of Hilburn, and it was soon announced by the mayor that a fine of $70 would be levied upon any trapping within the village. So, the Woody-Chuck seemed to be secure in his pond-side den.

But soon he had a mate and there were new worries that there would be even more groundhogs running about, digging up folks’ gardens and burrowing under house porches. So, a team of locals got the fire department to hook-up a hose to the Third Street hydrant in order to flood the groundhogs out. We kids were afraid they would be drowned, but we were assured that the groundhogs had other hidden exits and that as the burrow filled up, they would escape from those. So, on a Saturday morning in July, Ricky Cramshaw, Cindy Maloney and I were standing at the top of the Third Street bend in the road, looking down the park bank through the brush at the men laying out the fire hose. They were thrashing into the brush to ‘flush out’ Woody-Chuck. Although we had searched, we had yet to find his backdoor exit. Now we eagerly waited to see from where he would emerge with his mate and kin.

One of the men shoved the fire house down into the den opening and then they called back up the line to where my dad Walt was waiting with a big wrench on the fire hydrant, ready to open it up. From where we stood, we could see him turning the wrench. Then we could see the hose fatten up with water all along the way down into the pond park. It wound its way along to where some of the men stood, and then up and into Woody-Chuck’s den. We could almost hear the water flushing through the tunnels of the den, but still there was no sign of any groundhogs charging out of the ground. The men walked around the brush, kicking at the thick stubs, but they saw nothing. Walt walked down to where we stood and asked, “No sign of him?”

Ricky said, “Nope. Maybe he already moved his family out of there?”

Walt said, “Not likely. No, I think he’s still in there somewhere.”

I was about to ask if it was possible that they all got drowned, when Cindy shouted, “Look!”

And there to the right, in the thick of an old tree stump, out popped Woody-Chuck, his partner and three more small ones! They scurried up the bank and waddled out onto third street. All of them were wet and looked really annoyed. They then made their way across the street and into some barberry thickets. Walt walked back up to the fire hydrant and shut it off. The men pulled out the hose and then sealed off the den entrance with some rocks and even found the exit through the old stump and smashed that down into the tunnel. It was over.

A week later though, Woody-Chuck and family were comfortably back in their den. No one bothered with them after that. 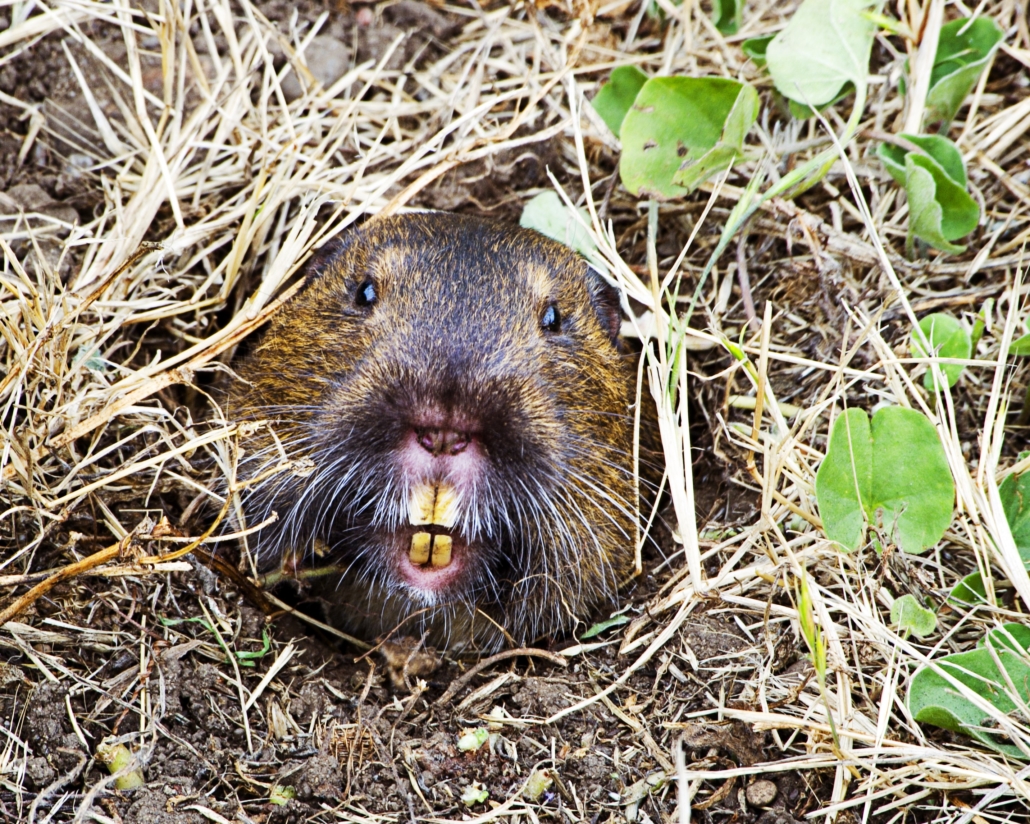