The Time of Seeds

Our cooking instructor, Eva Szigeti, reminds us of the lore and symbolism surrounding springtime, and why it is a time for sowing physical and metaphorical seeds.

In the Greek myth of Demeter and Persephone, young Persephone is carried away by Hades to the underworld. Her grieving mother Demeter, the Goddess of The Harvest, refuses to let the earth bear fruit in her daughter’s absence. However, an eventual deal is struck, in which Persephone can return to her mother for six months of the year, as long as she spends the remaining six with Hades in the underworld. Persephone’s annual return to earth marks the beginning of spring and the growing season. Persephone is not only the queen of the underworld, but also a goddess of spring growth.

In The Story of the Root Children (a favorite of young children), Mother Earth opens the door leading up to the world on an early spring day, and the root children walk in a long procession from underground out to the earth, bringing with them new growth, new life.

It is not surprising that spring has a strong presence in myths and stories of different cultures. In the spring, nature transitions from cold, dark, and sleep, bringing the promise of light, warm weather, and most importantly, of abundant food. The triumph of light, awakening, new life, cyclical renewal, are all associated with spring, as are two powerful spring symbols: eggs and seeds.

For those who work the land, the early signs of nature’s transition are their cue to begin planting. The farmer puts on her rain boots and, equipped with her gardening tools and packets of seeds, goes out to the garden as soon as the soil can be worked. Life feels good. The intoxicating smell of freshly turned soil and the seeds in the basket waiting to be planted hold a promise of new life and a promise of harvest.  The farmer puts seeds into the ground, hoping that with her help their potential will unfold later in the season. It takes faith to plant…

Seeds germinate in the darkness and reach for the light as they emerge through the soil’s surface. For seeds that overwintered under the blanket of soil and snow, more light and longer days signal that it is time to wake up. Spring brings one of only two days each year when light and darkness are perfectly balanced: the spring equinox. Equinox literally means equal night. Light and darkness share the same portion of the day.  Planting around the spring equinox is a technique used by traditional farming cultures worldwide. Sowing seeds outdoors on the first day of spring may not have been an option for us this year, but we can start seeds in the greenhouse or on a windowsill in the days following that day of balance.

When planting, we choose to plant some seeds in the hope of an edible harvest, others because we consider the plants or their flowers beautiful, and sometimes we have other reasons. There is one plant that I plant each spring just for the sake of its seeds.

Several years ago, in a friend’s garden, I saw a flowering plant that I had not seen before. It was late summer and some of the bloom had already turned into seeds. The plant itself wasn’t remarkable in any way. It was bushy, rather weedy-looking, with small yellow flowers that stayed closed in bright sun. It was the kind of plant that looked like it would survive almost anywhere. But the seeds were anything but ordinary. They were the most unusual and beautiful seeds I have ever seen. They were large, about ¼ of an inch long, dark and shaped like an ancient Greek amphora (a vase used in ancient times for food storage). I just had to have them and I put some into my pocket. I named the plants that grew from these seeds “amphora plants”. I do not know the plant’s proper botanical name. I looked for it in seed catalogs and gardening books without any success.  But, like last season and the season before, I will plant my amphora seeds again for their promise of beauty.

Spring is here (or coming very soon) and whether we put physical seeds into the soil, or as gardeners in the garden of life we sow seeds of gratitude for life and light, it is time to go out and plant.

There are many seed themed activities we can do with children. Planning the garden and preparing for planting are activities we can engage in even before the weather is right for actual gardening. On a cold afternoon, we made seed packets to give away to our friends.

For this project, you will need some seeds: either seeds you have saved from your garden or store bought ones. Choose seeds your friends could plant and easily grow. For those with gardens, beans, sunflower, squash, salad greens or annual flowers are a good choice. Seeds of basil, parsley, dill, or greens (to be grown as micro-greens) work well for containers. If you wish, you can create your own seed mix.

Use the template below to cut out the paper for the seed packets. You can use plain white paper, construction paper or even wrapping paper. Fold the paper along the middle fold. This will be the bottom of the packet. Put some paper glue on the side flaps and fold to seal the sides of the packet. Decorate the front using pencils, crayons or stickers. Remember to include the name of the seeds the packet is intended for. Fill the packet with seeds, fold the top flap and use glue or use a sticker to close it up.

This is a lovely birthday party activity for younger children! 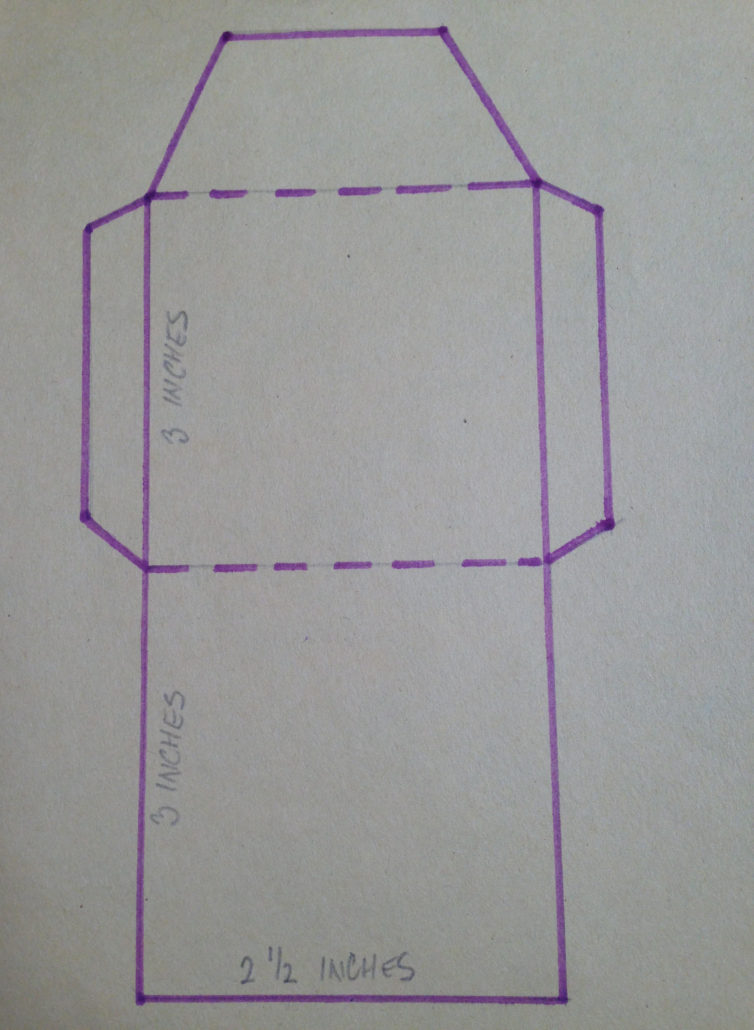