The Traveler and the Cook: The Land Beyond the Forest

Our Cooking Instructor, Eva Szigeti, takes us on a journey into The Land Beyond the Forest, where sheep roam, and their cheese is currency…

Food is part of our everyday life. Even when our primary travel goal is not the exploration of the cuisine of a certain region or county, culinary experience often finds us. While traveling, we are inevitably exposed to local food, and sometimes we stumble upon a great culinary experience almost by a chance.

That summer, we were traveling in a part of Romania known as Transylvania, The Land Beyond the Forest. Although in the Western world Transylvania is often associated with Dracula (thanks to Bram Stoker’s novel), the story of the vampire count doesn’t have a prominent place in the culture of the region. We were exploring a different side of the country: its historic towns, salt mines, dark pine forests, and beautiful wild meadows.

One day, we were hoping to buy some local sheep cheese in a small mountain village. A villager advised us to get the cheese directly from the shepherds. This seemed simple enough. We were given instructions of where to find them, and off we went, leaving the village and hiking up the hills to high-altitude meadows in search of the shepherds and their flock. The two-hour walk took us through rolling hills with green pastures and blooming wild flowers. This is where the shepherds and their sheep spend the whole summer. In early spring, villagers merge their animals, and a shepherd and his helpers herd the sheep and goats to pastures in the hills above the village. The sheep and goats graze on the mountain grass throughout the warm season. The men sustain themselves on a diet consisting mostly of milk, cheese, polenta, preserved meats, and gifts of the mountain: wild mushrooms, berries, and herbs. The shepherds and the animals spend the whole summer and early fall up on the high meadows, and they return to the valley along with the cold autumn winds.

Our walk seemed longer than what we had expected. Did we get lost? The first sign that we were heading in the right direction came in the form of loud, not-too-friendly shepherd dogs running toward us. The dogs are a much-needed help for the shepherds. They herd the animals and protect them in an environment where wolves and bears are a real threat. To them, we were intruders. We stopped to make sure the shepherd noticed us before the dogs could reach us. 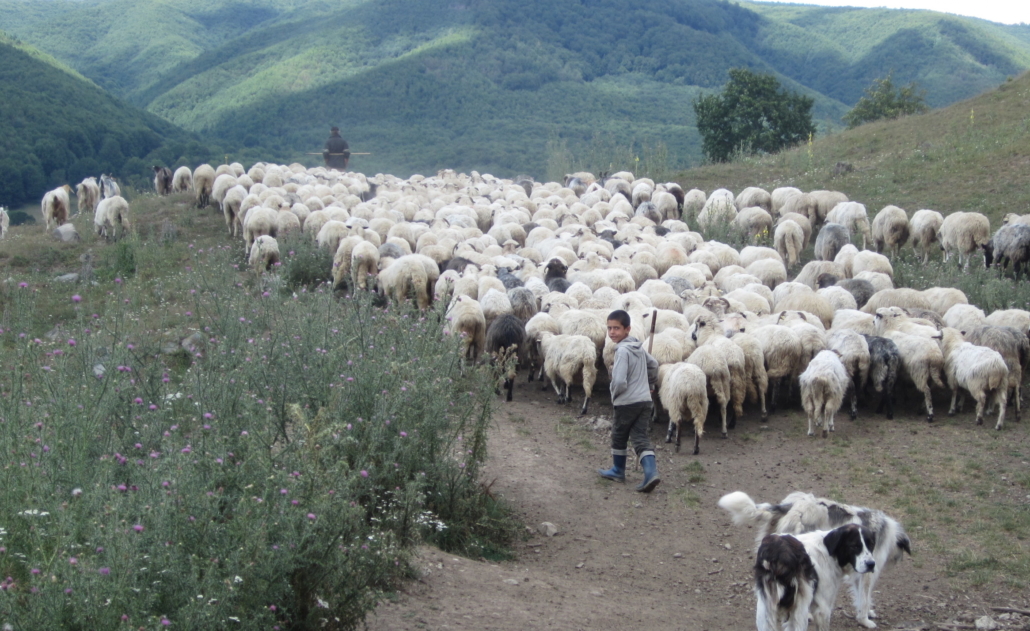 The shepherd’s hut is a shabby one-room shack with no electricity or running water. It serves as a shelter and sleeping area for the men, as well as a work space where cheese is made. The role of the shepherd and the cheese maker merge here; the shepherd not only takes care of the animals—he also turns their milk into cheese. The inside of the hut is rudimentary and dark. There is no stainless steel equipment here; just beat-up pots, rustic wooden tools that could be part of a museum exhibition, and cheese hanging from the ceiling.  The tools and methods of cheese making are the same as they were 100, 200, perhaps even 500 years ago. 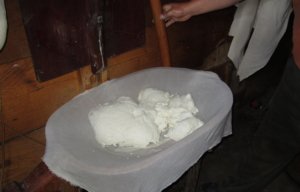 If a cheese from this hut sat on a shelf of a specialty cheese store in a big city, it would be described as an artisan organic cheese made from milk of pasture-raised animals. But the wheels from these pastures are not destined for a store, and they could never be sold in one. The shabby shepherds’ hut—without running water and refrigeration, milk heated above a wood fire, wooden tools with quite a bit of patina—hardly conforms to the regulations of the European Union. The cheese from the shepherd’s hut doesn’t enter any formal market. Except for a wheel or two sold to the occasional town-people wanting to taste the real stuff, this cheese feeds the locals. A self-sufficient lifestyle is still prevailing in the economy of small, remote mountain villages. The cheese is distributed among the villagers—the owners of the animals. Traditionally, making cheese was a way of preserving milk. Some of the cheese made in the summer is still saved for the winter months. For the most part, the cheese is consumed within the families. Any excess is bartered for produce or services. 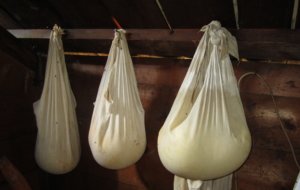 While cheese can serve as a currency in these parts of the world, money may not buy us cheese on the high mountain pastures. Bills aren’t very useful up in the mountains. The shepherd prefers to trade his cheese for fresh vegetables, preserved meats, and bread. Luckily, we came prepared….

Carrying cheese, like a trophy, we walked back down to the village, tired but happy and amazed. We found and tasted a truly authentic Transylvanian cheese; a rustic, pure, strong, perhaps unpolished cheese, deeply rooted in the local land and the ancient tradition of cheese making on the high pastures of The Land Beyond the Forest. 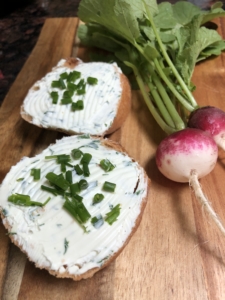 Making cheese at home is not a small task. Although this spread isn’t a true cheese spread (it is made from plain whole-milk yogurt), its preparation involves one of the steps present in cheese making (draining the whey out of the cheese). It is a great first project when introducing the concept of cheese-making to children.

Line a colander with several layers of cheesecloth. Put the colander into a pot or large bowl. The whey draining from the yogurt will accumulate in this vessel. Measure out the yogurt and put it into the colander. Keep the draining yogurt in the fridge for a day or two. The longer it drains, the firmer the spread gets.

Take the spread out of the refrigerator and put it into a bowl. Add salt and finely chopped fresh herbs. (We used dill and chives.) Enjoy with bread or fresh vegetables.

The whey could be used for smoothies or shakes, as a cooking liquid for grains or potatoes, or in muffin and bread recipes.