Uncle Doc and the Deer Call

November back in the village of Hillburn during my boyhood was not a time for contracting workers. The independent contractors of the Ramapo Valley went off into the mountains, shotguns in hand, looking for deer; everything else was put on hold. The first few days of hunting season brought the sounds of gun shots, and then the whitetail herd hunkered down and hunting got harder.

Uncle Doc loved his time in the woods, and despite his lack of success at bringing down a deer, he drove up to Hillburn and regularly met with my dad Walt and the other hunters in the wee hours of crisp November mornings. He carried a double barrel (traditional side-by-side) twelve gauge gun. He wore red and black checkered wool, and for all appearances was a local. Doc was Walt’s brother-in-law, and his real name was Herman. Herman had served in World War II, landed on Normandy and seldom talked about it. Some of the hunters who gathered in the morning hour believed Doc didn’t have the heart to kill a deer. I asked Walt that if this were true, then why did he bother? Walt said, “It’s just something he needs to do.”

And so it was that I followed these two men – my father Walt and Uncle Doc – up Torne Valley Road. They walked casually, toting their guns into the valley, up past the sand pit just as the night was slipping away. Walt stopped and took from his pocket a small wooden block with a rubber band stretched taught through an opening. He put it to his lips and blew hard. The sound it made was like that of a trumpet or an old dog passing gas. I was as amazed as Uncle Doc when Walt told us it was a deer call. Now I had heard the white tail deer snort, but this sound was nothing I believed any self-respecting deer would ever make. Walt blew it again and Doc begged him to stop, as it would surely scare any wild game for miles around. Walt said he made it for Doc, to help him call in a deer, but Doc wouldn’t have anything to do with it. I can’t say that I blamed him, either. 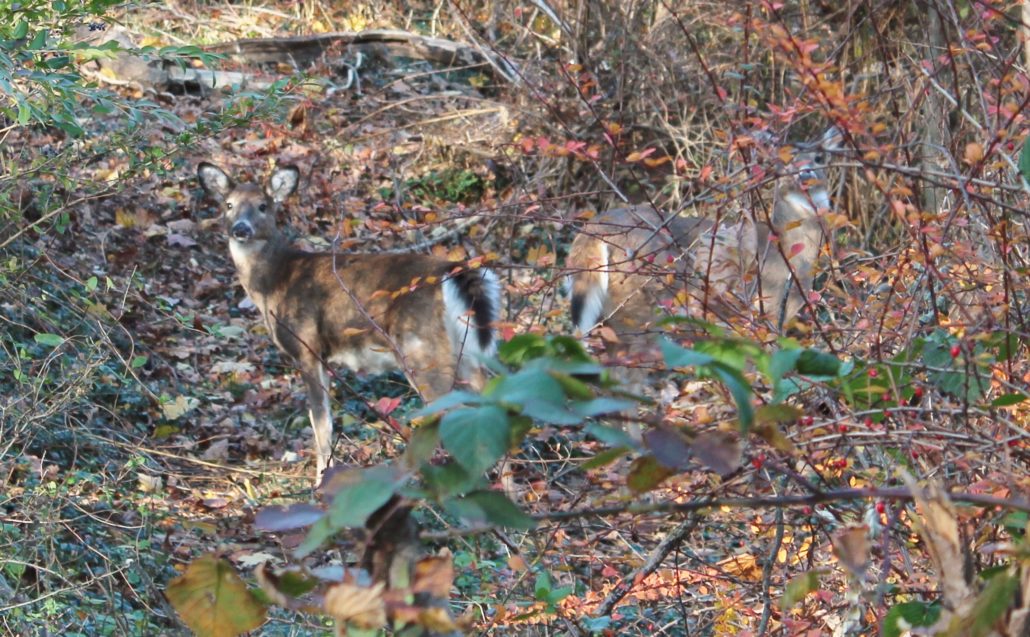 We left Uncle Doc posted just below a short outcrop of moss-covered rock, and there he had a commanding view of a deer trail below. We then cut back and started a wide, slow movement north and then to the east, around a cedar swamp that eventually leads back to the place where Doc was. We were doing a careful dance across the swamp, stepping from hummock to log in order to drive any deer down in Doc’s direction. My uncle in the meantime had tucked himself in against a great hemlock trunk, pulled out his pipe and settled in for a smoke. He was comforted by the pleasant tobacco blend, the crisp air and the ready shot gun. He was in a near meditative state that was suddenly shattered by the snort of a single bugle of sound from the ridge behind him.

Without moving other then to take the pipe from his mouth, Doc said aloud, “Very funny, Walt!”

He was answered with an even louder indignant burst of flatulence.

He shouted, “I’m not turning around, Walt!”

This time the rattled, snorting response was filled with anger.

Doc shrugged and said, “My goodness, Walt”, as he turned to see a massive whitetail buck whose antler rack rose above his head like an ancient crown. The deer stared down at Doc and snorted again, a perfect copy of Walt’s call.

We were still crossing the swamp when we heard the double barrel blast from Doc’s gun. I stumbled and plunged my boot into a deep puddle of swamp water. Walt turned around and as he pulled me up he said, “Sounds like he fired both barrels together”. Doc didn’t hit the deer, but he did some serious damage to an oak tree. We found the buck’s tracks and confirmed it was as big an animal as Doc reported it to be. Walt then handed the deer call to Doc but he again refused it. He said the call was so good a deer sound that he feared a hunter might take a shot at anyone who blew it.

A year later Uncle Doc did get a deer (not the majestic buck) and he did it without the help of the deer call. I used to take that call into the woods and sit at Doc’s hemlock trunk and blow it. I never saw the great buck but I did manage to call in a few young does. And even though he never actually used the call, when I blew it I would always think of Uncle Doc.