Chuck Stead, our beloved camp storyteller, tells us a mysterious tale of an unexpected winter discovery…

It was cold, cold, cold, and it was dry. It hadn’t snowed in three weeks. We could deal with the cold when there was snow, but without it, the ground was frozen hard and everywhere you stepped felt like you walked on jagged rock. The temperature hung around twenty degrees by day and colder by night. The animals don’t move much when the cold sets in like this; they conserve their energy. The fish drop low in the water and the ice fishermen don’t stay long when the winter wind picks up. So, the last thing you expect to see in these conditions is a snake.

Usually by November 1st, snakes go in under the rocks and don’t come out until after April 1st. Sometimes, if there is a mid-winter warm-up, a few snakes come out to look around and then rush back in under the rocks. Uncle Mal used to tell us, “No self-respected snake comes out in the winter time, because they are naked as a jay-bird.”

Ricky Cramshaw told him, “Uncle Mal, jay-birds ain’t naked—they are covered in feathers!”
Mal said to him, “That is not the point.”
Ricky said, “And jay-birds do come out in the winter!”
Mal said, “Ricky, it’s just a saying!”
“Yeah, and you is just saying it!”

Ricky and I were over at the Paint Shop because we found a frozen black snake down by the river and brought it to Uncle Mal. He stared down at the black snake that was frozen stiff in a neat straight line, like a piece of frozen rope. It was about two feet long, so Mal figured it was a young snake, as they can grow up to six feet or better. Mike, the shop dog, came along and sniffed the snake a few times, and then walked away. Mal rolled it over and we saw that it was white on the underside. He told us it was a Black Rat snake and that if it was black all around it was called a Black Racer.

Ricky said, “So why did it come out and freeze up like this?”
Mal said, “I don’t know. Sometimes they come out if it gets warm but it ain’t been warm in weeks.” He thought about this and then said, “And the thing is they don’t tend to hibernate under rocks by the river; no, they go up to the south side of the mountains where the rocks will keep them warm and dry.” He rolled it back over onto its belly so that its black side was now up again. He said, “No sir, this here snake did not get to the river on its own.”
I said, “What do you mean?”
“I mean, I figure that somebody tossed him down there.”
Ricky said, “Who would put a froze-up snake down by the river?”
Mal said, “Maybe someone found it somewhere else and thought it ought to be put down there?”

I wasn’t sure, but it kind of seemed like the frozen black snake wasn’t as straight as when we found it. I told Uncle Mal that, and he told us a story about one time in the late winter, when Uncle Dutchie found a big frozen Copper Head snake. He picked it up and walked along with it until it warmed up and came back to life!
Ricky said, “Hey, could this snake come back to life?”

Mal wasn’t sure, so he got out a five-gallon bucket and put the snake into it. When he picked it up I saw that it was no longer stiff as a stick, but more rope-y. We put the bucket near the hot air vent and sat by it, keeping an eye on the snake, as it slowly became more rubbery. Mal told us about how Native Americans believe that snakes come back to life all the time.

He started telling us ‘snake-come-back-to-life’ stories and we got to listening to the warm sound of his voice and to thinking about the people and the places in his stories. Then, all of a sudden, I heard a sound from inside the bucket. I jumped up and looked in, and there was the black snake, moving around in the bottom of the bucket! Mal got up and put a screen over the top and placed a hammer there to weigh down the screen. The black snake was now clearly wiggling around. It had come back to life!

Mal told us reptiles slow down and hibernate in the winter, but that if we hadn’t found the snake when we did, it would most likely have died. Ricky was thrilled and he named the snake ‘Blackie’. Mal told us it was not easy to take care of a black snake, especially in the winter time when they want to be asleep.
Ricky said, “He can sleep at my house!”

Mal didn’t agree. He made a few phone calls and then he drove us, with Blackie The Snake, up to the Bear Mountain Zoo, where they had a place to keep snakes in the winter time. There was this man there who knew all about snakes and he examined Blackie and said he was in good shape. He told us we had saved his life. We watched him put Blackie into a special indoor snake den where there were other black snakes sleeping under rocks. This man thanked us again and he walked us through the cold, over to the Bear Mountain Inn. He brought us hot chocolate at the Inn and then he and Mal talked about how long it had been this bitter cold. Then the man said, “You know, Mal, that snake could have only been out there a day or so.”

Mal said, “Yes sir, that’s what I figured.”
“So, somebody must have put him there.”
Mal said he figured that, too. Then both men got quiet and we finished our chocolate and Uncle Mal said, “Somebody is messing with the snakes.” 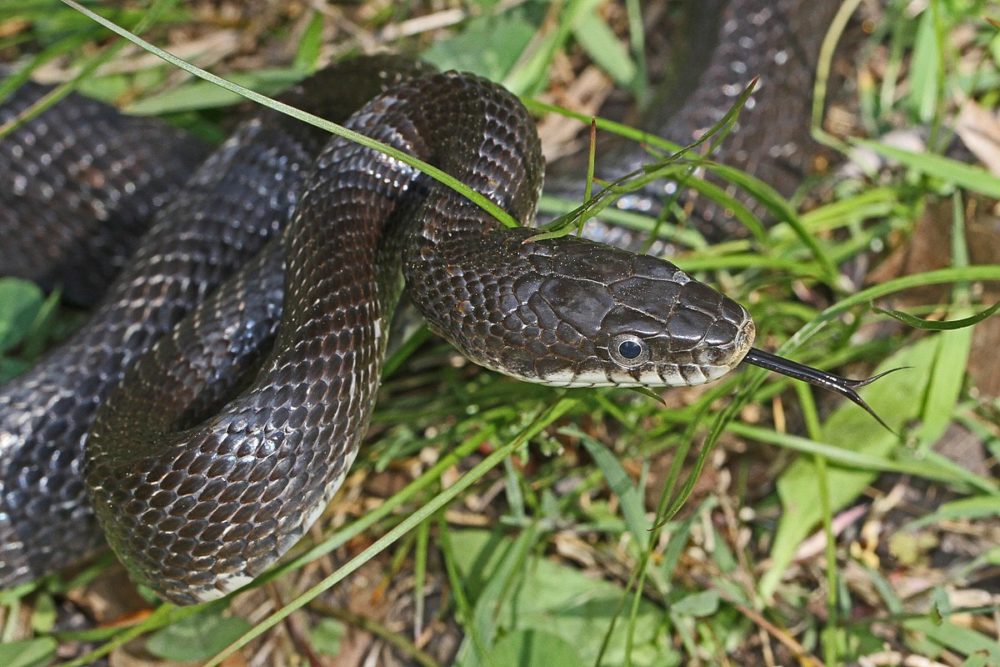