The Traveler and the Cook: Christmas Market In Vienna

Our cooking instructor, Eva Szigeti, writes about the nostalgia she feels around the holidays, particularly for the joys of the ‘holiday market’…

The holiday season is a time when we seem to be especially prone to nostalgia for childhood, for the magical time of hope and anticipation that brought light into the darkest part of the year. Nostalgia magnifies moments from childhood and leads to reminiscing about positive experiences. I miss the Christmas seasons of my childhood. No matter who hard I try to recreate the feeling of ‘Christmas’ every year, the holiday never seems to be the same as it was when I was a kid.Adults, do you remember snow globes? Those heavy glass (or plastic) spheres with a winter scene? When they are shaken, snow starts quietly coming down on the town or the landscape encased in the glass. Did you ever hold one as a child and feel mesmerized by the miniature world where snow was just one shake away? I always imagined myself being part of the scene. As the soft snow slowly came down inside of the glass-covered world, I was transported into the kingdom of imagination and dreams. How delightful! But seeing a snow globe as an adult, it seems more tacky than enchanting. I had to remember all the magic it brings, when my daughter asked for one few years ago.

As a child, I loved the Christmas market. I remember a bag of freshly roasted chestnuts warming my hands and the aroma of roasting chestnuts filling the town square. Enjoying the spirit of the holiday in a market is a nice way to spend a weekend day with children. For those who happened to be in Central Europe during the holiday season, Vienna is an excellent choice. Although I never went to a Christmas market in Vienna as a child, I had been to many others that provided a similar experience. 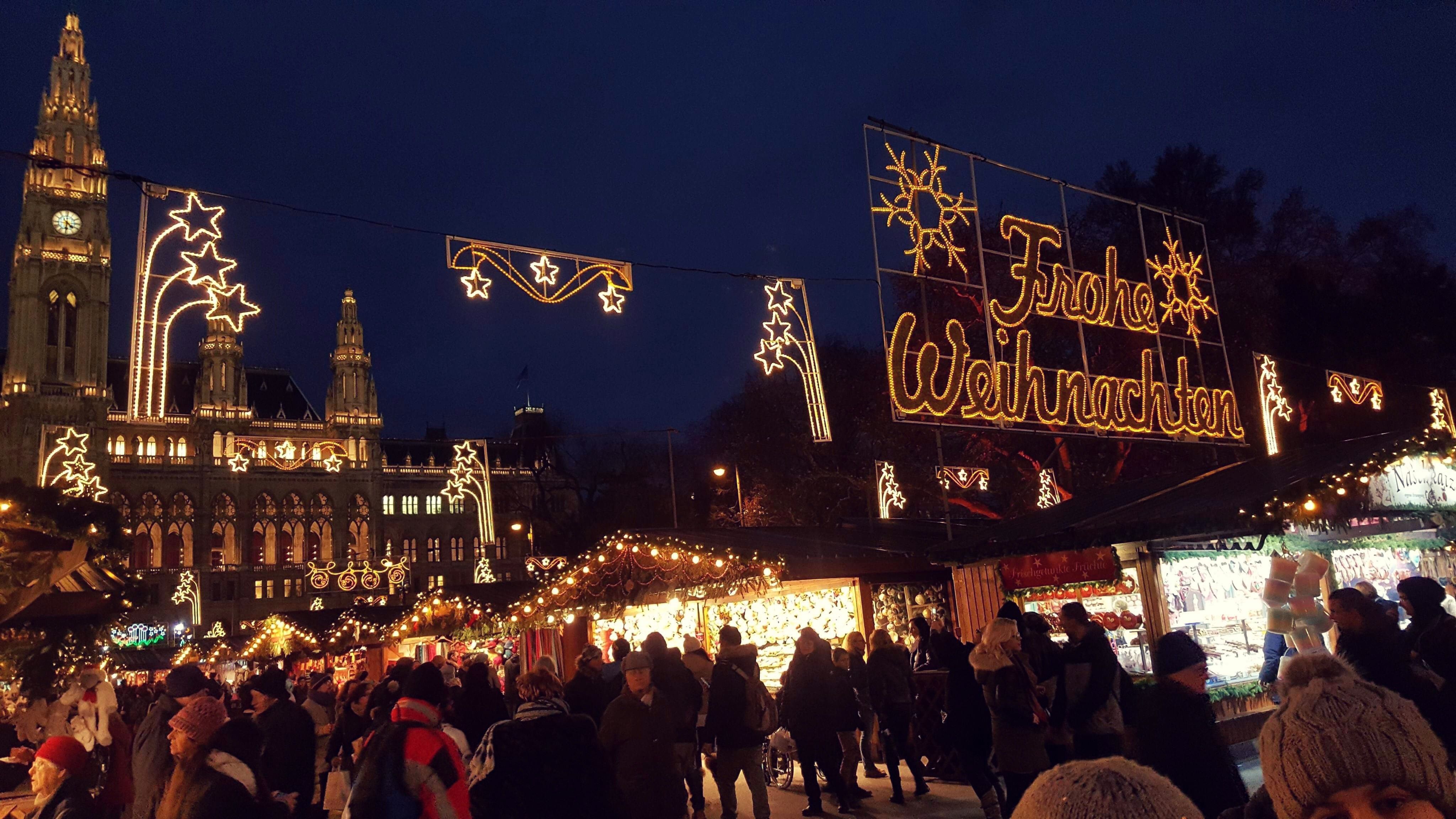 Vienna’s famous Christmas markets were likely the first place where snow globes were sold (and are still sold). Like many other inventions, the first snow globe was an unintended byproduct of a quest for something else – in this case, for a surgical lamp. The snow globe (Schneekugel) was patented at the end of the 19th century by Erwin Perzy, an Austrian surgical instruments mechanic. The hand-painted, manually assembled glass globes encasing a miniature St. Stephens Cathedral were a hit. The Perzy family continues to make a variety of snow globes to this day, and the family business still operates in the same house in Vienna.

Of course, there is no Christmas market without food and holiday treats. In a Christmas market in Vienna, this means stalls with grilled sausage, pretzels, sandwiches, roasted chestnuts and almonds, potato wedges, donut-like sweets (Krapfen), apples covered in red sugar glazing, cotton candy, and marzipan. Some stalls sell nothing but gingerbread decorated with colored frosting; hearts and stars with inscriptions of Christmas wishes.

For the sake of childhood nostalgia, I had to have a Schaumbecher which is an ice cream cone topped with marshmallow cream dipped in chocolate when I last visited a market. As children, we called them ‘winter ice cream’. It was nice to taste one again, although as a child, I had not been a big fan because they failed to deliver the taste of real ice cream.

Possibly more than by food, children at a market in Vienna will be enchanted by old-world wooden toys like pine cone animals, wooden birds, porcelain bells, and especially wooden figures that jump or fly (without batteries) when a string is pulled. And don’t expect to meet Santa in Vienna. In Austria and the Central European region, Christmas gifts are brought by the Christkind (Christ-child or Little Jesus).

In Central Europe, there is no Christmas without what the Austrians call vanilla kipferl (vanilla crescents). We decided to make a batch with my daughter recently. As we were baking, suddenly the wise-woman-persona of my nine-year-old daughter came to life and spoke, “You know, it is the small things that matter in life, like baking cookies or being with your family.” After my initial shock, I had to acknowledge that she was perfectly right. I hope she feels the wonder of the holiday, and one day she will yearn for the magic of her childhood Christmases.

These are typical Austro-Hungarian Christmas cookies. In Austria, they are usually made with almonds, whereas in Hungary, ground walnuts are preferred.

Vanilla sugar is available at European grocery stores, or you can made your own by burying a vanilla bean in a jar of sugar. Let it sit for about two weeks until the vanilla releases its flavor into the sugar. Nicely packaged home-made vanilla sugar also makes a good gift!

Beat the butter until smooth. Gradually work in the confectioner’s sugar and vanilla sugar. Add the egg yolk. Stir in the flour and the ground almond or nuts. Make a stiff dough. Divide the dough into two parts and form two large rolls. Refrigerate the dough for about 30 minutes. Preheat the oven to 35 degrees F. To form the crescents, cut about two teaspoons of dough. Gently roll the dough to form a rope with tapered end. Form the rope into a crescent. Put the cookie on a parchment lined baking sheet. Repeat the process with the rest of the dough. This batch will make about 50 crescents. Bake for 15-18 minutes or until the cookies are light golden around the edges. Cool the cookies on the sheet for about two minutes. Roll each cookie in the vanilla sugar to coat. Enjoy! 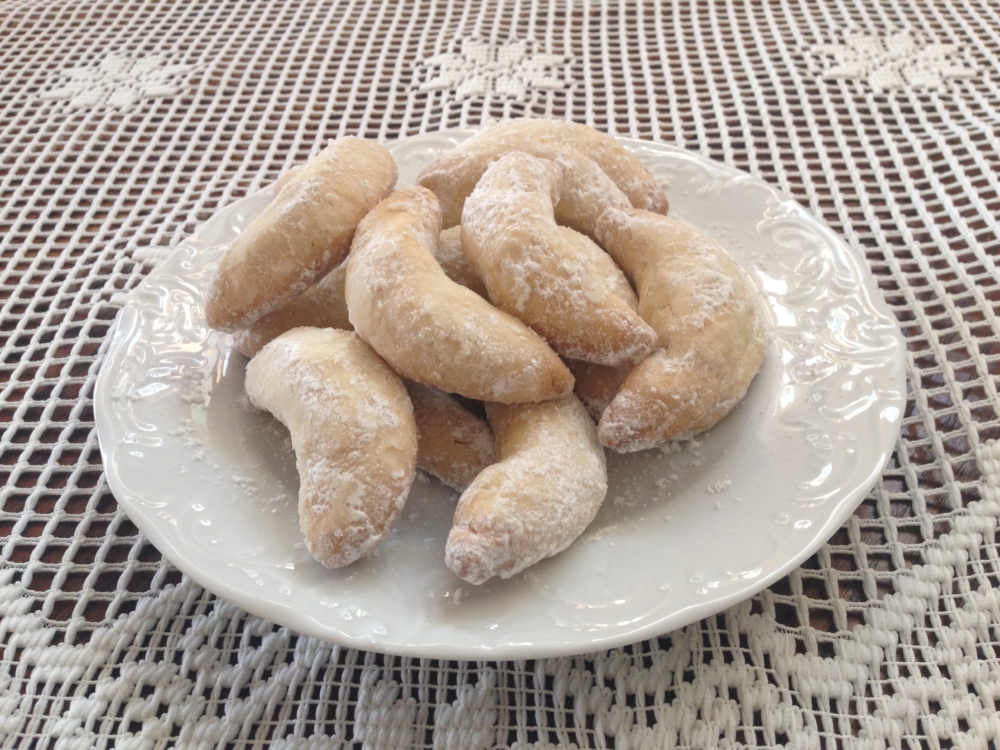